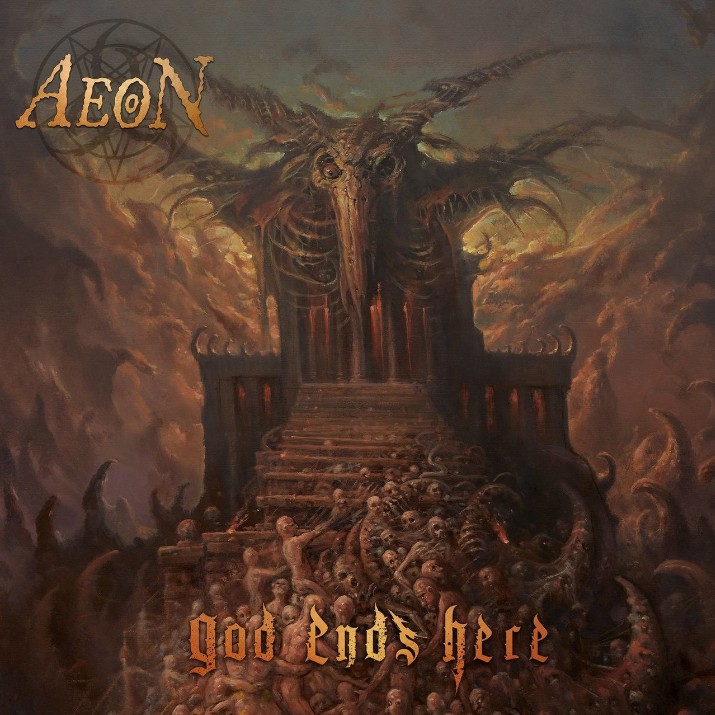 Since 1999, the collective known as Aeon has been spewing their brand of blasphemous death metal, with consistent output. And their brand-new release, aptly titled God Ends Here, sees the band continuing the path they have been carving for over 2 decades.

Their latest offering consists of no less than 16 tracks, with some ambience pieces in between to set the mood of the record as well as to offer a brief respite from the long track list, while still not making the experience feel interrupted at any moment. With a short intro we are then thrown into a savage display of pure, unhinged death metal massacre that grows in varying speeds yet constant intensity and heaviness. A way to describe Aeon would be to take them as the Swedish version of the legendary Deicide, although I dare say that Aeon has a consistency that Deicide lacked in many of their records. Every instrument is perfectly clear for the style in particular, riffs are crystal clear, and the bass' weight and presence are notorious in the mix as well. Drums are absolutely punishing, with a lot of different techniques used throughout the entire record. Vocals are the most similar aspect that can be compared to Deicide, as they mostly rely on double vocals tracks similar to what can be found in "The Stench Of Redemption", although used in tasteful doses rather than at every possible chance. Despite the long track list, there is a wide variety of rhythms here to enjoy, from fast-played frenzied songs like 'Liar's Den' to some more doom-ish offerings like 'Queen Of Lies', which serves as the perfect closer for this album.

The track list may detract some listeners, but it is a hell of a journey and one I repeatedly enjoyed on numerous times. My only complaint would be that, despite the short ambience pieces being there to serve as brief respites, the album could have worked just as well without them. The experience as a whole is unaffected by this, but the sudden pause in intensity may take away some of the pleasure in the brutality that is God Ends Here. Maybe a bit of a long record for some, but if you have the time to enjoy, you will love this.

The Floridian death metal guys from Östersund, Sweden are back after nine years of absence with their fifth full-length God Ends Here. I always liked their way of playing in the quite similar to Cannibal Corpse style (though some of their lyrics were quite infantile, IMO) and so I have to say that I was really looking forward to their latest output.

The first thing that meets the eye is the very impressive and sinister cover painted by Paolo Girardi. This is a very cool eye-catcher and is much more appealing than some of the covers they had before. The next thing that caught my attention is the very long track list. Aeon has 16 (!) tracks on the album but 5 of it are some short instrumentals. So everybody who can perform some abstract algebra will come to the conclusion that 11 "real" tracks remain. Taking a look at the line-up shows that Aeon have changed their drummer (Timo Häkkinen was replaced by Janne Jaloma also drummer in Dark Funeral) and their former guitarist Daniel Dlimi has returned.

God Ends Here starts with a short intro which turns into 'Liars Den', a very fast and brutal death metal song. You can find all the trademarks Aeon already used on their previous releases in Cannibal Corpse-like riffing and the usual staccato-like drums paired with deep, partly overlaid with some distorted, Glen Benton-like vocals. 'Let it Burn' is even faster than the track before and shows a lot of ferocity and relentlessness. The next tracks don't differ much in intensity from the mentioned two. It is well-performed high-speed death metal sprinkled with some very appealing guitar solos. Okay, sometimes the guys slow down their tempo but nevertheless it stays very brutal. The first very big surprise comes up with the title track. After a very epic and somewhat calm intro, 'God Ends Here' starts with very atmospheric keyboard sounds and a very slow melody. I would say that the track is almost black metal-like, if there weren't the death metal vocals. Through the creepy riffs and drumming a really sinister atmosphere is created. It is a quite remarkable track. 'Queen Of Lies' is the other very atmospheric track, which lives from its slow-paced parts, too. I think that these two tracks and also the instrumental ones show that Aeon don't have to define themselves through blunt bludgeoning but also through tracks like those. Of course, the other songs are in the usual style we are used to get by them and this really doesn't bother me either. Lyrically they deal with the common blasphemous and bloodshed stuff so that we all don't get too many surprises on God Ends Here.

The production done by Ronnie Björnström who also produced the predecessor Aeons Black is very clear and powerful. It is a very good one for a death metal album which doesn't leave any open wishes. So there is only one question remaining – when God ends here, what will start then?