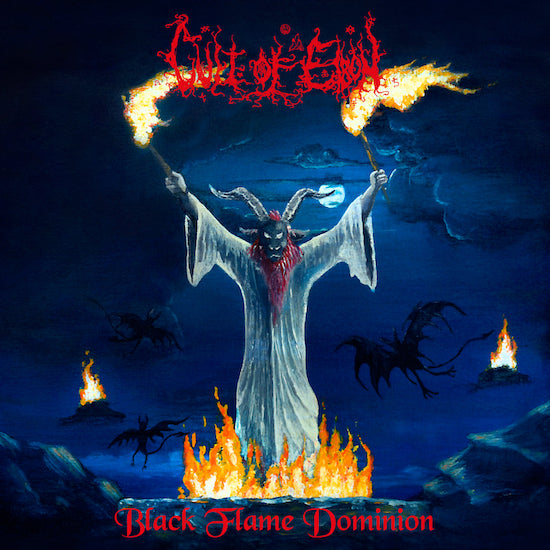 Could not wait for a follow up to Lycan Twilight Sorcery from Cult Of Eibon. Like a child that can't keep still for a minute, I'd find myself visiting The Metal Archives for an update in the discography section of this band. Then a track off the album was uploaded on the Iron Bonehead channel and my eyes lit up. Saw the promo soon after, hit play and still can't stop blasting this thing. Same experience with Caedes Cruenta's "Of Ritual Necrophagia And Mysterious Ghoul Cults" that resulted in an instant vinyl purchase thanks to a special someone, Black Flame Dominion will have you digging in those pockets to fork up the cash.

Coming from the guys in Caedes Cruenta, Kawir, Walpurgia and Black Blood Invocation (still on the lookout for that full length), there was no doubt that that this album would contain the same level of proficiency as their prior works and more notably what is expected of such a prestigious unit in Greek black metal. The simplicity of the drumming merged with traditional heavy metal guitar licks and piercing keyboard melodies makes for a consuming, immersive and mystifying listen. As to how many times I've had Black Flame Dominion on repeat is beyond keeping track of especially when you've got so many great songs featured on the album.

'Into The Realm of Na-Girt-A-Lu' is just an excellent track; frigid yet enchanting keyboard sections see the album go from fossilized black metal to a breathing force of black metal mysticism and grandeur that makes the genre feel young again like the first time hearing Bathory's "Under The Sign Of The Black Mark" or Venom's "At War With Satan", this track reinvigorates and reintroduces you to the genre with an epic and eerie touch. Yes the argument of keyboards in black metal persists, but how can anyone deny the sincerity and respect it is incorporated on Black Flame Dominion.

Then to follow up such a beautiful yet beastly song is an even more brilliant piece anointed with dripping keyboards, sorcerean riffs and visceral vocals; 'The Dreamer And The Morning Star' howls to the listener a most ominous, somber and majestic melody riding the winds of traditional heavy metal and 1st wave black metal. Like a mermaid's hypnotizing voice this track takes you to the very core of the ceremonial atmosphere Cult Of Eibon create on Black Flame Dominion. The fluid transitions from song to song also aid the atmosphere on here as its able to maintain that consistent trance-like feeling that do justice to songs later down the order such as 'Recollections From The Chthonian Empire' and 'The Mournful Chime Of Charon's Bell'.

Coming from a Caedes Cruenta background you will most certainly find similarities as far as the song writing goes. That almost accentuated method of playing where the beat takes a sudden climb in pacing meanwhile the guitar melodies strike with sheer potency and in the end produces a cascading rhythmic effect that translates seamlessly the tone of the album especially on say a track like 'Crossing The Stargate' or aforementioned 'The Mournful Chime Of Charon's Bell'.

Black Flame Dominion, though being a worthwhile (understatement) follow up to Lycan Twilight Sorcery did manage to stir-up some worry at first listen particularly in the production area as the drumming appeared to be programmed. I don't know if that is indeed the case but as the album progressed that concern quickly dispelled and could not have been a smaller prick in the grandeur of Black Flame Dominion.

Black Flame Dominion is yet another reason to keep abreast with all that is Greek black metal coming from this unit and all associated cultists.