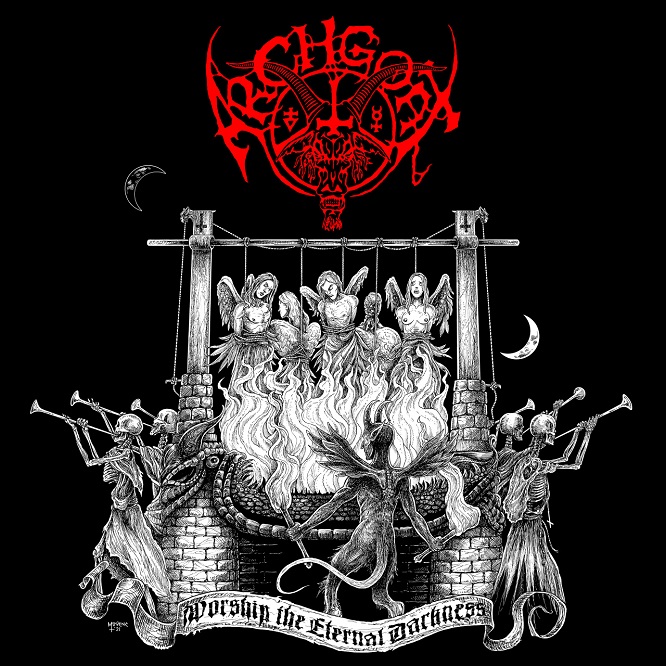 Erect, energetic, testosterone bloated, and bloody evil is how Worship The Eternal Darkness will have you feeling. For me there's always been black metal, death metal and then Archgoat somewhere in there but also far away from the accepted norm. That's because they can be so easily identified, no other band sounds like the Finnish tormentors; and if any band should try to copy, they would fall flat and embarrass themselves because Archgoat is more than just a template of sounds. So long ago they were formed and here today they still sit at the throne of genre that has become so over saturated with alleged black metal that has removed HIS name and replaced it with nothing. Archgoat has remained true to what black metal is and Worship The Eternal Darkness further anoints the masses with the ointment of what Archgoat represent and embody.

It’s an Archgoat album so you know what to expect, only the deepest roars from Lord Angelslayer whilst his brother Ritual Butcherer lay down the 6-string nuisance. The drummer has also has somewhat cemented his place in Archgoat as a fitting musician; his work here truly shines and appears to be played with certainty and authority in contrast to the Luciferian Crown, that seemed to be just feeling around for a good stance. But even then, the material on that album as a while sounded solid but here on Worship The Eternal Darkness, there's absolute clarity of what needs to be done and how it should be executed.

It’s a masters ball game, Archgoat have been doing it for a long fucking time, they even took a hiatus and came back only to find that no one could dare replicate the sound and feeling they conjure. Such fucking demonic incantations and evil expressed with nasty offerings in the form of 'Heavens Ablaze', 'Black Womb Gnosis' and the skin crawling, hair standing, black/thrash n' roll fused 'Rats Pray God'. Total destruction from the Finnish syndicate of sickness, no bullshit, just pure fucking Archgoat.

Also, a bit more happening it seems on Worship The Eternal Darkness; synth added, more diverse compositions, greater flow from side A to side B, and a whole lot more fury captured, just check out the speed of 'Empyrean Armageddon' and the lynching sample that sounds so much more painful than the one heard on the split with Satanic Warmaster, 'Lux Satanae (Thirteen Hymns of Finnish Devil Worship)'. Then the steam jumps through the roof with 'Blessed In The Light Of Lucifer'; man, this fucking album makes a statement as far as black metal goes; Archgoat shows all the mislead how it is supposed to be played. Exalt the fucking kings, Archgoat.