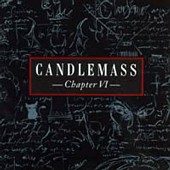 Chapter VI was the first and simultaneously last regular album of Candlemass with Tomas Vikström on vocals. The successor of the figurehead Messiah Marcolin delivered a good performance while offering a wide spectrum. His clear voice and his classic style give the album its own character. But it is not only the charismatic, accurate voice of Vikström. The elegant, not very heavy yet somehow fitting sound also lends the album a special coloring. It's a pretty unusual sound, not sticky, although the keyboards play a remarkable role, but very atmospheric. Stylish pictures in the booklet to each and every song complement the production in a suitable manner. No doubt, Chapter VI profits from a holistic approach.

The entire output uncovers the melodic side of the Swedish kings of doom. Well, doom? I do not think that real maniacs of this sub-genre would call this album a typical doom metal output. Bone-dry riffs and a constantly slow pace do not play a role here. Candlemass prefer a mid-tempo approach and the songs have a smooth flow. No doubt, usually I like to listen to more extreme music, but the relative harmonic presentation is perfectly tailor-made for Vikström's style of singing. But do not confuse "harmonic" with "commercial". The fifth studio work with the slightly irritating title (live albums don't count!) is free from mainstream influences.

For example, the song has an average length of nearly six minutes and their patterns are comprehensible, but not primitive. The album also does not spread mass-compatible vibes, because it evokes a very melancholic, more or less dramatic aura. This sometimes even depressive atmosphere is definitely not the sound the missionaries of the event generation want to hear. Quite the opposite, titles like "Julie Laughs No More" reveal an authentic sadness. Even I am depressed, because old, grumpy and lame dudes like me should be the ones who have nothing to laugh about. But pretty girls like Julie should have a good life, at least the one I know... but I digress. "Julie..." is one of two tracks which have been co-written by Lars Johansson. (I am surprised, because I always thought that Leif Edling is a despot who does not allow his band members to contribute to the compositions.) In addition, it is among the best tracks of the album in view of its comparatively heavy verses and chorus. However, the output is filled to the brim with very good titles. The bombastic and profound "Where the Runes Still Speak" grows constantly. It might be that it has a slightly repetitive configuration, but I like its melody very much and the same applies for some details like the blowing wind in the background. Even its keyboard solo with the seventies vibes pleases me and I forget for a short time that I usually neither like this instrument nor this decade.

"Temple of the Dead" with its rather jagged opening riff marks another milestone. It's a great track with a lot of substance, a slight oriental touch and warm yet unpretentious melodies. However, all songs have some interesting elements, even the bonus track deserves this label. I like it that the material expresses wistfulness without neglecting the necessary degree of crispness. Maturity shimmers through every note, but it does not asphyxiate the vitality of the songs. The whole album avoids boring sequences, and this is, as we all know, no matter of course. Nevertheless, be aware of the fact that Chapter VI is very different to the first studio works of the band. This is the "guilt" of the production, the less heavy material and the new voice. But I confess that I never had a love affair with the solid records that Candlemass released during their early years - and this might be a reason why I like the modified approach of Chapter VI, despite or precisely because of the style of Tomas Vikström.