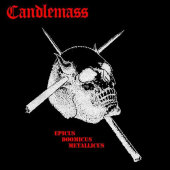 An ominous, delicately-picked acoustic intro, supplemented by swelling church organs marks the start of Epicus Doomicus Metallicus, one of the more appropriately named albums ever to be committed to tape. 'Solitude' is the song, and in many ways, this is Candlemass's signature song. The intro soon makes way for a truly monstrous riff, and Johan Lanquist's mighty tenor vocals. The slightly cliched nature of the lyrics: 'Earth to earth, ashes to ashes etc', ripped by many a metal band from the Anglican funeral service matter little when delivered with this much emotion and power, and with the spiralling lead lending a strange air of beautiful despondency to proceedings, 'Solitude' turns full circle, concluding with a lone voice backed by an acoustic, imploring some form of higher power to 'Please let [him] die in solitude'.

The rest of the album is built around equally molten riffage, with 'Demon's Gate' and 'Crystal Ball' in particular revealing bounty indeed for those of us who live for the riff. Keyboards and clean guitars are sprinkled throughout the album, but never dominate the guitars and vocals, adding a real sense of tension through dynamics that all classic metal records should exhibit, but sadly few do these days.

Although held up by many as bastions of true doom, and not to say that there aren't doom moments to be found here, Candlemass have always emphasized the metal side of their personality above all else. 'Black Stone Wielder' has it's relatively fast and chuggy moments, and 'A Sorcerer's Pledge' could even be said to raise a gallop at times. There's also a strong neo-classical feel to much of the guitar work, with the counterpoint melodies of the latter half of 'Under The Oak' providing one of the album's best musical passages.

Epicus... is a great album for several reasons. Firstly, the songs are just so strong. Where so many albums strive unsuccessfully to create so much as a handful of memorable moments, Candlemass's debut burns song after song, melody after melody into your soul, from almost the first listen. Secondly, the tones of the guitars, and the overall sound and atmosphere create the indefinable arcane aura of true heavy metal that just can't be faked. Epicus... possesses a classicism that fits it straight into an impeccable metal lineage, starting at Sabbath, and proceeding through Pentagram and Cirith Ungol, to the present day standard bearers like Reverend Bizarre and Solitude Aeturnus. Yes there are some metal cliches at work here, and well-worn melodic patterns, but the overall effect is so spell-binding that you would swear that Candlemass did it first, and everyone else copied them.

Candlemass would go on to record another trio of very good albums, as well as a fine comeback record in 2005, but as a definitive encapsulation of their fundamental sound, Epicus Doomicus Metallicus is very hard to beat.

Few bands have impacted the metal scene in such a way as Candlemass did with this behemoth of an album. 1986 was the year, Sweden was the country and Epicus Doomicus Metallicus was the name of the album that made an enormous crater when it impacted into the 80's scene. Trash metal seemed to be the dominating trend in those years with Sodom, Megadeth, Slayer, Kreator, Metallica and so on and so forth. Every single trash metal band was hitting the scene with great recordings that focused mainly on noise, speed and aggression. However, Candlemass said “hold on guys, let´s be epic, heavy as fuck and way slower than the rest of those bands”. So, it is time to praise the undoubtable and untouchable classic that influenced thousands of bands yet to come and that also put the brakes on to the speedy and aggressive bands back in those years.

Epicus Doomicus Metallicus captures you with the intrigue of the album title. Then, it casts you on the spell of 'Solitude', the first track in this monstrous cornerstone. 'Solitude' is simply the hymn for desperation and depression, it is atmospheric, moody and functions almost as a funeral march. Since the first verse you realize of the overwhelming sadness that engulfs the person who wrote the lyrics. The voice of Johan Längquist fits perfectly with the lyrics, showing a spectral register that transmits the deep forlorn perfectly. The riffs are seriously heavy as fuck, I really mean it, Iommi would be proud of the crushing punishment that Mats "Mappe" Björkman displays. The bass, oh my fucking god, the bass lines are almighty and permeate the musical skeleton with incredible force sponsored by Leif Edling. Hey folks! This is just the first song, the beginning of the ominous path we have yet to walk.

The album is composed of six pieces of absolute greatness and obscure poetry. 'Demons Gate' opens with some cryptic spoken words that set the mood to what's to come next. The riffs in this song are more driven by a dark hypnotic melody accompanied by the ghastly vocal performance of Längquist. The bass gallops along the guitars with simple lines but at the same time seemed to be omnipresent and very predominant; providing a thick and chunky aura to the music and overall production. Every single track on Epicus Doomicus Metallicus is transcendental and leaves a profound mark in your musical memory. No fillers at all, all the music is created with the intention to trap the listener in a valley of desolation and loneliness. 'Crystal Ball' appears to have the same slow and crushing atmosphere but by the minute 3:00 speeds just a little bit to show the incredible musicianship of the guys in Candlemass just to come back to the slow pace that will become a trademark in the genre. Let's continue the journey through the Acheron, guided by some galloping guitars that help tell the story of the 'Black Stone Wielder'. A song that changes gears between slow-crushing pace and a more galloping dynamics offered by the guitars and drums. 'Under the Oak' and 'A Sorcerer's Pledge' close the album in a monumental way, all songs here are instant anthemic classics of doom/epic doom metal.

As I said at the beginning of the review, Candlemass changed the accelerated pace that most bands were following back in the time to implement a more overwhelming sonic experience and also to change the status quo of the faster the better. They implemented the less is more approach influenced by the down tune guitars of Black Sabbath. Something that caught my attention is the age of the band members when they released Epicus Doomicus Metallicus; they were surprisingly in their early twenties. You expect to listen to such a mature effort from a musician in their thirties or more but these guys were very young even though the recording sounds incredibly mature and self- centered.

Concluding the revision of Epicus Doomicus Metallicus, I have to say that there is no waste of notes, riffs, fills, lines or screams in this recording. Everything is strategically set up to capture your ear and cast you in a spell of subterranean sadness, longing and forlorn. The greatness that we had the opportunity to witness is epic and very few bands have been able to craft such imposing day view albums. Changing paradigms of music structures, production and even aesthetics, Candlemass became a reference and influential force for upcoming acts like Paradise Lost, My Dying Bride and The Gathering. So, in conclusion, Epicus Doomicus Metallicus is a totemic monument where we all must kneel and praise for the impact it had on doom metal. Listening to it is mandatory if you call yourself a metalhead.