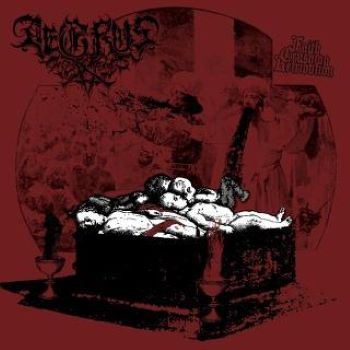 Faith Crushing Retribution was the second demo of Aegrus. It appeared almost three years after the first one and the comparatively long break left its mark. Not in terms of the musical style, but with regard to the considerably improved production. The first tones of the opener demonstrate that the new songs benefit from a very aggressive and sharp guitar tone. Maybe it is a tad too dominant, but at least the vocals withstand the raw and constantly attacking six strings.

The first sign of life already showed the competence of the musicians in terms of song-writing, but Faith Crushing Retribution takes the next step. For instance, lend an ear to the fittingly titled 'Blasphemy Reigns Surpreme'. It mixes different parts successfully. An atmospheric intro sets the stage, bulldozing guitars and rumbling drums follow. A break after 100 seconds kicks off a thrashing, riff-dominated part. Melancholy does not play a big role here, but black fury sets the tone. Finally, a solo guitar, the hateful, pretty hysteric voice and high speed drumming bring this song to its end. Maybe this is no outstanding configuration, but a remarkable one for a demo band – in particular in view of the fact that all parts blend seamlessly with each other. The band even dares to present a calm bass break in the middle of 'The Profane Flame'. It’s just a short one, but it gives the number an additional flavour. Indeed, all tracks reveal the big potential of the musicians and it feels good to know that they were in the meantime able to translate their talent into fantastic official albums.

Guess it’s needless to say that the four pitch-black eruptions offer nothing else but traditional, more or less typical black metal. The Finnish origin shimmers through the songs that avoid useless gimmicks and frills. In 2009, Aegrus already knew what a track needs – and, equally important, what it does not need. They get straight to the point. Therefore can be no doubt that the songs of the here reviewed demo were worthy of being published again. So it is now with The Devil’s Works MMVI – MMXIII.