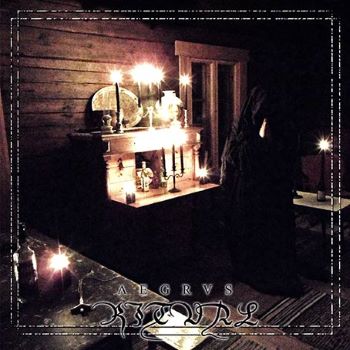 Probably every person has a phase in which his creativity does not bubble over, and probably every person has a phase of great mildness. In the case of Aegrus, these two phases occurred simultaneously, namely during the process of creating Ritual. The demo does not exactly excel in terms of punch and intensity. There are stormier and better releases of the Finns, before and after Ritual. But Aegrus are too competent to come around the corner with weak songs. So the inclined listener enjoys some haunting melodies. In some moments they remind me of the Swedish Pest (as their music was still black and nothing else) and they like to appear surprisingly without notice, for instance in 'The Sign From The Fallen'.

Overall, as mentioned, the material appears pretty cozy sometimes. There are indeed faster passages, but these have to struggle in order to give the three tracks their character. Unfortunately, the songs also do not create an outstanding degree of creepy atmosphere. Thus Aegrus sit between a rock and a hard place. Have a look at the closer: 'Inhale My Misanthropical Dream' cruises mainly through mid-tempo part. It’s definitely not bad. Darkness reigns, but I miss a little the thunderstorm. It takes almost four minutes, before a ghostly shimmering guitar line emerges and the piece regains density and power as a result.

Despite my points of criticism, the music still has something to offer. Compositional maturity can not be denied the band on Ritual (by the way, great artwork). The sound is once again convincing and so it is surprising that Aegrus with their unadulterated, here quite melodically influenced black metal needed almost ten long years until a label took pity and released their first long-playing record. Especially I am surprised about this fact, because the band never varied their basic pattern in a detrimental way since Unholy Invocations. Quite the opposite, in my opinion Aegrus stood out positively from bumbling attempts of other beginners from the start. If you have not heard a tone of them so far, you can start your discovery tour wherever you want. As a black metal supporter, you will never be disappointed.