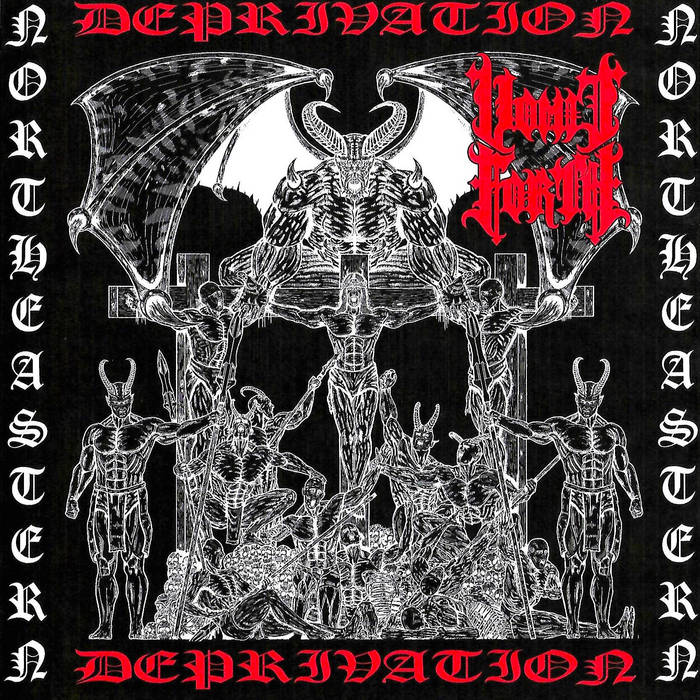 Man, the Maggot Stomp label is on a roll, so it seems. Lately, this label has made quite the impression on me with some awesome releases by Disembowel, Fluids and Visceral Mass, so I decided to check out more of their stuff. Not such an easy task, as it turned out, because I've got the impression that their distribution here in Europe leaves quite some to be desired, to be honest. Nevertheless I managed to lay my grubby hands on this EP by Vomit Forth, for a reasonable price at that. Don't you just love that band name?

Where the releases by the bands I mentioned earlier trade in filth-ridden and unsettling old school death metal, Vomit Forth deals more into the sounds of bands that were released by labels such as Sevared and United Guttural around the turn of the century. The band plays a tad more refined style of pummeling death than the acts mentioned before, culling more from early releases from bands like Skinless, Deaden, Putrid Pile or Viral Load, which really is refreshing these days. With the brutal death genre deteriorating further and further into what some call "wigger slam", it warms the heart to hear an act that has it's roots in the old style of US death metal, beefed up with the technical skill and aggression of late 90's/early to mid 00's brutal death.

The band's style is built on a sturdy base of Suffocation and early Cannibal Corpse influenced metal, upon which the band builds a heavy wall of bulldozing death metal riffing, bellowing grunts and tempos that range from crawling slow, through chugging mid tempo to raging blasts and back again. They employ what you could call slams, but not in the way it's comprehended today, but employing lethal grooves that incite headbanging and mosh pit mayhem instead, at times sounding like mid 90's Malevolent Creation playing Jungle Rot songs. Playing is tight and the band let some lead guitar melodies sporadically pop up, while the focus is on coherent songs, with a production that is clear and crisp. Seeing as this is a compilation of different releases, the sound tends to slightly change here and there throughout the cd's runtime, but it's barely noticeable and not a nuisance at all.

All of this makes for a gripping death metal album by an excellent band that may sound a bit more refined than their label mates, but understand their craft through and through. This comes highly recommended if you're into the more traditional brutal death metal sounds from 15 to 20 years ago.