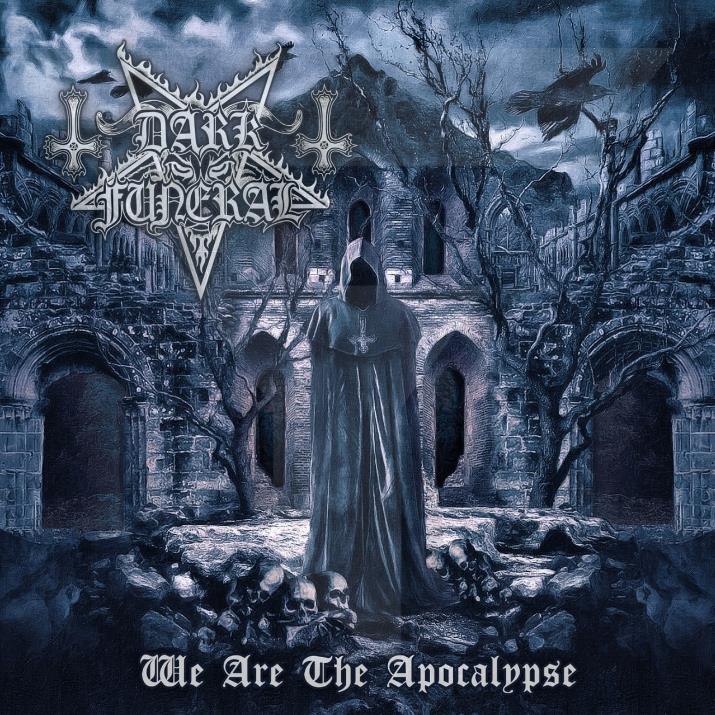 Type: Full-Length
Release Date: March 18th, 2022
Label: Century Media Records
Genre: Black
1 Nightfall
2 Let The Devil In
3 When Our Vengeance Is Done
4 Nosferatu
5 When I'm Gone
6 Beyond The Grave
7 A Beast To Praise
8 Leviathan
9 We Are The Apocalypse
MetalBite on YouTube

Hello, may I introduce myself? I was born as Jan Michael Svanberg, later I chose the pseudonym Lord Ahriman, but, admittedly, Lawlie Blackness would be more appropriate. Why? Well, just like my distant spiritual relative Blackie Lawless, my musical offerings never change. I always use the same, tried and tested song patterns and I have standardized their lengths. I vary the riffs I created some decades ago only marginally and I do not make experiments in terms of the very clean (fortunately not soulless) production. Okay, my hired lead vocalist is not forced to sing embarrassing “oh nanana” lines, but just like Blackie, I do not shy away from semi-ballads every now and then. This time they are called 'Let The Devil In' and 'When I’m Gone'. The first one begins with a catchy, simple drum figure, but it does not live up to its promising start. The latter sounds tough and boring due to its tired guitars, lack of intensity and dragging rhythms. To illustrate my missing inspiration, I like to agree with the song titles my vocalist prefers. 'Nightfall', 'Nosferatu' or 'Leviathan' promise groundbreaking lyrics, right? Finally, you have already guessed, the faceless creature of the stereotyped raven-skulls-night-artwork is the dumbass who missed the funeral procession shown on The Secrets Of The Black Art. So what? There are still a lot of people who like and (more important) buy my albums, haha!

Thank you, Lawlie, for this contribution to the review, here is Felix. I am one of these miserable creatures who still like Dark Funeral, although We Are The Apocalypse (another stupid song title) offers absolutely nothing new. It’s an album that follows the “more of the same” dogma in a painfully strict manner. Thus it comes that compact, violent pieces like 'A Beast To Praise' stand in the tradition of many previous tracks of the band. Naturally, they act as a blood refresher. But I cannot say that they deliver an overdose of excitement or tension, because we have heard this sort of songs from the Swedes many times before and therefore the material is very quickly decoded. Lawli, sorry, Lord Ahriman has written each and every song here, and maybe this is a problem. Other creative minds would certainly be able to contribute other creative ideas. On 'Where Shadows Forever Reign', he had some help from the drummer, now everything weighs on him – only the genre-typical, negligible lyrics have been written by Heljamadr.

However, this work is no disappointment. The musical basis of Ahriman is strong enough to bring raging storms like 'Nightfall' or 'Beyond The Grave' to light. In terms of darkness, intensity and compositional substance, they are on a par with the musical content of the great early works of the Swedish institution. Of course, one can ignore the fact that Ahriman is stuck in a blind alley. It’s easy to enjoy the pretty brutal, smoothly flowing songs (with the exception of the two lame stinkers Ahriman has mentioned in the first paragraph). They are very well arranged, the performance is absolutely professional and they do not suffer from sterility. Yet I miss something; the true essence of black metal. Its misanthropy, its cruelty and its total negativity does not really shimmer through the songs. This does not cause the record to lose massive value. But since the release of the perfect Vobiscum Satanas (at least perfect in my humble opinion, the appreciated colleague Lich Coldheart probably disagrees…), I have extremely high expectations when it comes to a new Dark Funeral album. These were never fulfilled, but again and again hope beats experience. And so I listen with somehow ambivalent feelings to We Are The Apocalypse, although two third of the output is really good. If they add five percent more atmosphere and ten percent more spirituality on their next work (expected release date: 2030) and if they reduce the vapid spoken words parts, they will be a fantastic band again. Until then, Dark Funeral is a formation with a good fundament and highly recommendable items in their back catalogue, but without a fascinating perspective.

Six! Six! Six long years it took Swedish devil worshippers of Dark Funeral to record their follow-up album We Are The Apocalypse to Where Shadows Forever Reign. That is quite a long time and accordingly high were the expectations towards this album. One thing that gave me a little bit of relief before being able to listen to the album was the cover. It is blue and this is (at least for me) a good sign for a good Dark Funeral album. (I guess I don't have to talk about the orange-red ones more than necessary.) The first two videos which were released in advance also gave me some more peace of mind.

Now I have the full album and it took me several listening sessions to fully appreciate it. Why? Well, of course Dark Funeral still sound like Dark Funeral with a lot of high-speed black metal tremolo pickings and drums and the shrieking demonic vocals by Heljarmadr but here and there some more melodic parts crept into the tracks and this sounded first a little bit strange to me, the same with the many spoke words parts in the tracks. It's not really bad but if you loved the first three Dark Funeral albums you will probably get a little bit irritated about this. But actually I have to admit that this melodic stuff really makes We Are The Apocalypse a very varied album that doesn't appear to be boring after a while but really grows with these new facets in the sound.

The album starts with 'A Beast To Praise' which shows the typical Dark Funeral trademarks but if you listen to it more closely you will notice these small melodic nuances that you can catch here and there. 'Let The Devil In' starts very slow and catchy and becomes a really epic yet majestic track with some really intense riff monsters and very cool blast beats. Some more melodic tracks worth mentioning are 'Leviathan' (how many bands have released in the last years a track with this title???) with a surprising acoustic part in the beginning and some unusual doomy beats in it and 'Nightfall' which has some great melodies and riffs as well and will probably become one of the highlights on future live shows. 'When I'm Gone' is the most remarkable track on the album because the band totally reduced the tempo and created a gloomy black-doom riff monster that shows a lot of classic heavy metal influences in it. This song will make you shiver even at a warm spring day in the sun.

On the other hand there are the typical Dark Funeral tracks which don't offer any surprises to the fans like 'Beyond The Grave' or the title track which could have also been on the other blue albums as well. The production is quite typical for Dark Funeral. It was recorded in the same studio as its predecessor, it is very dynamic and not too sterile as it often happens with black metal productions.

My personal highlights are the really well performed and recorded powerful drums. So get your own personal apocalypse for your stereo and let's hope that it will stay the only one!!!