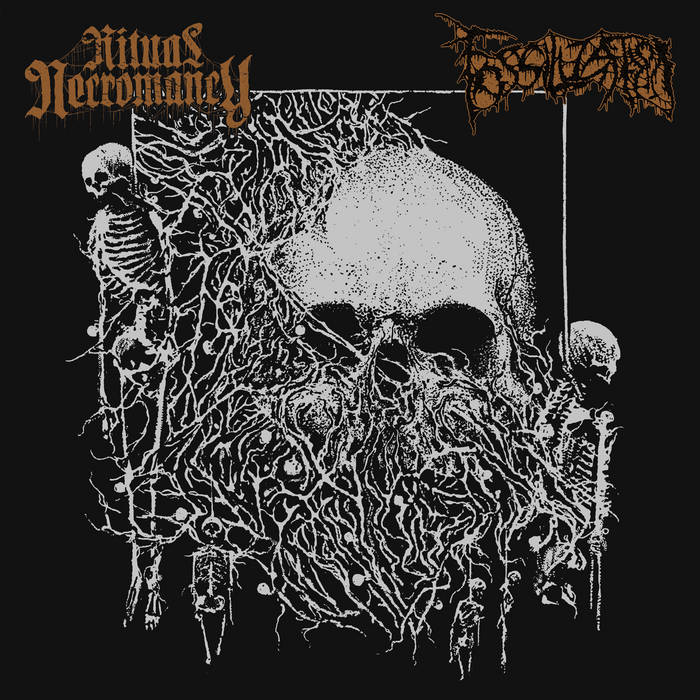 Its been such a long time since digging up anything in the graveyard with Ritual Necromancy. But they've come back with the company of Fossilization to desecrate the dirt. Released on Everlasting Spew 25th February 2022, this split with these 2 grave demons sees the bands at there present state with a more nourished and fertilized sound though the core of both entities remain untouched.

Ritual Necromancy heads the assault and the first shovel dug into the grave disturbs and exhumes a mighty pile of worms as they continue to 'Enter The Depths'. All attributes of this monster is very much active yet more proficient than ever before. Augmented with synthesized backing choirs and a somewhat clearer sound, the band lashes out violently after the crawling death/doom introduction. Blazing with sheer fury the ritual comes alive again as this 15 minute return to the nadir of damnation puts on display vintage Ritual Necromancy. Bone shattering blast beats, vocals that would suck the sun off its axis and guitar work that'd engrave and script mighty names of old deep into a once sacred soil. Technical proficiency remains a cornerstone of Ritual Necromancy, as you'd be struck by some excellent drumming amidst the sonic guitar rift and showers of vocal disdain. Moving with elegance through sonic rhythms without displaying fault, excellent timing and power behind the kit. Altogether crafting a statement for the next full-length release, Ritual Necromancy continues to excel in this musical sphere.

And from the very first note, Fossilization made it clear that they would not be taking a backseat here. Loud and with a roar of anger, the ground shakes and abysses form. Staring without flinch, the council that is Fossilization reach deep within their bag of musical munition to swing and pierce with precision the heart of death metal. Offering sudden diversions into black metal territory, doom and thrash metal. A chaotic yet trance like effect is applied to the two carvings they excavate with 'Exalted In The Altar Of Insignificance' and 'With Blood And Feathers'. Two tracks that possess much more momentum and stamina than most could ever attempt to muster. Nasty riffs scattered here and there, vocals like the stomp of a prehistoric megalith and drumming that spells out brilliance. This is want it means to be passionate about your craft and the death metal world are lucky a band this dedicated exists.