Ritual Necromancy quickly rose to power upon being risen in 2008 after putting into effect their evil practice on their debut demo which was shortly followed up by "Oath of the Abyss". Despite the lacking production the material spoke volumes of the band's potential that soon came to fruition on "Void Manifest". That EP floored the masses and signaled even greater things to follow. "Disinterred Horror" made grave-fall and quickly became the band's most accomplished offering, giving supporters a real treat of terror and ever more reasons to stay clenched to the music. Justin Friday backed by members with massive experience under their belt through involvement with bands the likes of Weregoat and Terror Oath could do no wrong as the march to desecrate and destroy with their demonic death metal continues. 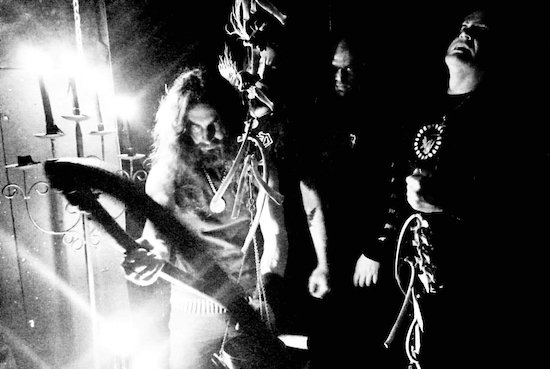 Thanks for doing this interview with MetalBite; how has everything been going with yourself and touring in Ritual Necromancy?

Cheers Alex! All has been well. Our last tour in Europe was pure mayhem, we will certainly be back soon!

What compelled you to form Ritual Necromancy?

Unseen forces... the beyond. The drive to herald the unknown that is impossible to perceive. An addiction to chaos and what we as humans consider death and the perception of finality.

How did you go about contriving the band's name?

I wouldn't say we contrived the name but, it seemed a fitting representation of the point of the band; to communicate with and represent our ideas of death and, all that we perceive it to be.

How did the team behind Ritual Necromancy meet?

Psychedelics in a graveyard and a proper desire to make extreme death metal.

Since being formed in 2008 you have managed to put out 2 full length records an EP and a demo with each showing considerable progression and song writing improvement. Thus, how tough are the members of Ritual Necromancy are on each other when it comes to constructive criticism?

We are very tough on each other. Since the first demo, we knew, collectively, what we expected from one another for each of the next recordings. A vision or idea has to be fulfilled and given that a majority of the music was written by a bass player and a drummer, the interpretation of those ideas by the guitarists had to match or exceed what we wanted and be performed accurately. There is no excuse for settling.

Who writes the lyrical content and where do you draw inspiration from to construct a 'Command the Sigil' or 'Void Manifest'?

I write the lyrics. The themes often come from dreams and/or hallucinations, with or without drug inducement. I try to propel an embodiment of complete control while being entangled in chaos. It's an interpretation of derangement, disembodiment, pure violence and fear, while devoid of the general conscious and relationship humanity tries to rationalize and mold into something inherently acceptable that our collective minds deem capable to process.

What is the compositional process of a song like? Walk us through the steps.

It's very simple. Someone creates a skeleton for a song, and we work it and add and subtract ideas until it satisfies us all.

Is there a particular mood you have to be in before you begin to compose music for the band?

Yes. The music demands a mindset of horrid nature.

How do you deal with creative roadblocks if ever you encounter such?

The roadblocks are inevitable. We just put it aside and try something new until we are ready to go back and revisit an idea with a new mentality.

Your vocals are extremely deep; they sound just as precise and powerful live as they do in the studio. How long have you been doing death metal vocals?

I did vocals in a death metal band a couple years prior to Ritual Necromancy but, that is it. The vocals are catharsis to me and represent an embodiment of something inhuman. No practice, no warmup, only possession.

I enjoyed the promotional video for 'Command of Sigil', I interpret that was about invoking the deceased, or is there more to it?

Thus, without being too direct, what do the lyrics on the 'Disinterred Horror' album reflect?

A delving into the psychosis of what one sees, feels, thinks, when summoning the unknown inhabitants of the dimensions of death and devours our idea of life in their wake.

Does 'Disinterred Horror's music transcend what some term as fiction to a space within reality?

One can only try.

Are there any books, figures etc. you borrow content or cite as inspirations for Ritual Necromancy?

No. Nothing borrowed or cited but, there are a lot of ideas out there that coincide. 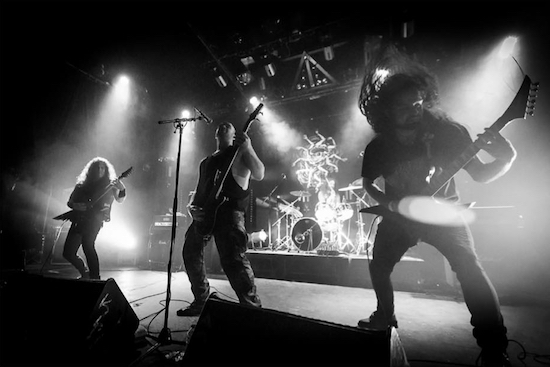 Is the music at all attached to any personal experience/s?

Yes. All of the music was derivative of experiences and ritualistic practices we sought out.

For me the artwork on Disinterred Horror represents/depicts the manifestation of the logically unreal into the real. From a philosophical perspective what would you say the artwork signifies?

Exactly that. Josh McClear painted an incredible depiction of what I asked of him. To find the unknown and repressed nature of himself and his art. An instinct, not a conscious display.

Is there any new material being constructed for a new album?

We are in the writing process for a new album. We also have an unreleased track from the Disinterred recording scheduled to be released as split very soon.

Can you give any hints about direction or what and where you'd like to see the album progress towards?

All we can say is that it is even more extreme, musically and thematically.

Having been involved in other bands such as Death Fetishist and Noctis, did you at any point find those influences bleeding into Ritual Necromancy?

I only played with those bands as a live musician, and it was only a few gigs each. So, to answer your question, no, nothing bled into the other.

Portland is rich in quality death metal, are there any bands playing the genre you currently admire from the area?

There are so many bands out of that area now and most of them are quality and keeping true and wretched death metal alive for years to come. When we started there was nothing by way of death metal. And now there are dozens of bands. Torture Rack, Witch Vomit, Sempiternal Dusk, Apraxic, Shrine of the Serpent, Nightfell, Diabolic Oath are a few to check out. Again, there are so many now that it is hard to keep track.

Do you see the possibility of a split record somewhere in the future with any of the mentioned bands?

We do have plans for a split with another band from that area but, not from Portland. I won't spoil the announcement here but, we should be announcing it and releasing it within this year.

How has the relationship between Dark Descent records and Ritual Necromancy been as of late?

It's always been great. Matt and Dark Descent remain true to their support and proclamation of underground metal, just as they began.

I always thought Oath of the Abyss could use a production overhaul, the music was really robbed of its effect, yet the album is still sound compositionally. Could you say if there will be any reworking of the album's production in the future?

No, I don't think we will ever rerelease Oath with a new production. I can't deny that those songs deserve a better production but, it is what it is. And while the recording isn't the best, it's still very odd and serves its purpose.

It's been great chatting with you, thanks for even acknowledging MetalBite's interview request. We want another album soon. Any closing words for the masses?

Cheers again Alex and thanks for the support! We will have another slab of insanity for everyone to feast on soon! All the one truth! All hail DEATH!