Debut EP from Necro Chaos, "Spiral of Obscurity" out on Helldprod records March 20th, 2020 on cassette limited to 100 copies, delivers a charming all the while hostile swing at the death metal genre. Erecting 4 walls of early to mid 90s death metal fury, the trio manage to contrive a familiar though seemingly unique sound of their own with the noticeable incorporation of synth and some classicism to march alongside bone-crushing and parasitic vocals, wrecking guitar riffs and drums with dark musical themes. MetalBite caught up with the band at the height of their momentum for a few words surrounding "Spiral of Obscurity". 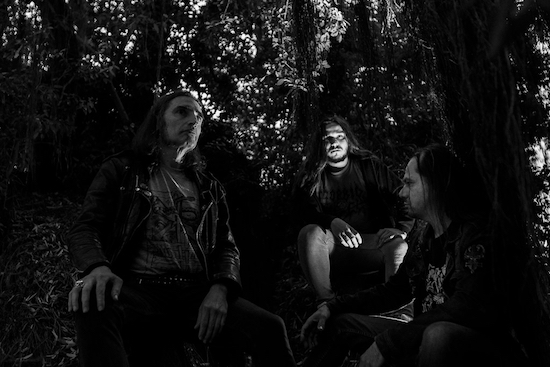 What is the music on your debut EP "Spiral of Obscurity" about?

Morto - It's about different ways of evilness and how evil always returns, creating a Spiral of Obscurity. Sometimes inside the towers of power lives a selfish, greedy, mad man and his evil creations have a huge impact in the many around. In the "Spiral of Obscurity" we have War, Death and Hell!

How long did it take to record the music on "Spiral of Obscurity"?

Deathminator - It took me an afternoon.

DeadOscar - It was done quite fast individually as it took us one afternoon to record each instrument except for the vocals. It took all about maybe 2 months to do everything because one week we would do this and the next we would do that.

Morto - The process of recording was not long, we practiced our songs for some time and when we felt comfortable we went to our rehearsal room and recorded there. It took me a little more time with the vocals. I had never recorded vocals before, so I was not even aware of the sound of my voice. I had to try different levels of low and high vocals in order to obtain something that satisfied us. So it was an afternoon for the drums, one for the rhythm guitar, another for the solos, another for the bass and maybe 3 or 4 afternoons for the vocals.

In addition to death metal there are some black metal aspects on the EP, did this come about naturally?

Deathminator - I think so, but I think there is only in one riff that you can notice that.

DeadOscar - Maybe on a riff in 'Casket Breaker' but you may find it in different places. If you search hard you can find some black metal and also some thrash or some heavy metal somewhere in these songs. Those genres aren't mutually exclusive. Some riffs and parts borrow something from different types of metal, which is perfectly natural as long as it fits the song.

Morto - Yes, it came naturally. We all listen to extreme music so it's completely normal that some parts of the songs could give you an impression of Black Metal. But we don't think in those terms of genres, we just try to create something that everyone in the band is pleased with, something that make us bang our heads

Also the sounds of the violin and some synth could be detected on 'Entanglement of War', what were you aiming for with the implementation of such?

Morto - DeadOscar uses many pedals with different effects that give a complementation to the rest of the instruments. I like especially those sounds in 'Entanglement of War' as it expands the song in a cool way.

DeadOscar -In that particular song there is an octaver, a shimmering reverb and a delay - that's the shimmer in the intro that can occasionally sounds like a violin. On the bridge parts there's only the octaver. There wasn't a synth involved in that song but nowadays I do use a synth in the intro instead of the reverb. The use of effects is always a learning process and sometimes you come to the conclusion that you can achieve a stronger mood with the use of different effects. In that song the aim was to achieve some dramatism, trying to relate to the war thematic.

How did Necro Chaos come to be?

Morto - There was a time when me and DeadOscar had two different bars in Porto and they both close their activities in the first half of 2018. We had some free time and I ask DeadOscar if he was interested in starting a band. Later on when we already had some material Deathminator got in the band. We didn't feel the need of a second guitar so we stay as a trio.

DeadOscar - Morto invited me to form a band on a drunk night in his bar (Fundo do Poço), I don't know why - maybe it was the alcohol. He also invited Deathminator but he was too busy with 2 bands, after a while he left one band (Soul Doubt) and knowing we were trying to play this kind of sound he offered his services and we gladly took him aboard.

How would you describe your brand of death metal?

Morto - I define it as Necro Classic Death Metal.

What sets Necro Chaos apart from other bands within the domain of this style?

Morto - Well, first of all we try to have an identity and not to be something we are not. We try also to be as free as we can in the creation of our songs. We all listen to a lot of metal so we have many influences and not just one genera inspiration. The effects of DeadOscar are also something that is used to distinguish our sound.

Deathminator - I think what sets us apart is the use of effects in the context of the old school riffs which gives a different sparkle to the songs.

The music on "Spiral of Obscurity" has a rather clean production for an EP. Who handled the mixing, mastering etc?

Morto - We recorded with our friend Luís Ferreira who plays in Wanderer, Lyzzard and Boulder. As I said early we recorded in our rehearsal room with limited material but when you have the aim to do things right you can do much with less. With all the instruments and vocals recorded we just had to wait for Luís to work on it and the result left us very satisfied. As a musician he is more connected with bands that have cleaner productions so I guess it was a natural thing for him and it was also something that pleased us.

DeadOscar - His words were: "It's a demo but I wanna make it sound like an EP" - and I really think he achieved that. The mixing was the most difficult part because we were always unsatisfied with some small details. The general idea was to have a compromise between some rawness and a clear sound.

The band is from Portugal but your music has a very mid-era Swedish death metal sound; can you explain what led to that?

DeadOscar - I do love the early Swedish death metal so I take that as a compliment but I don't think we sound like that. Swedish DM riffs are generally more thick and punkish than ours. Our compositions are more influenced by the old American death metal and in terms of sound I don't think we sound so raw as the Swedish stuff. And there's no Boss Heavy Metal 2 involved.

Morto - Sweden is a very strong country providing good metal bands, some of them are my favorites, but not only the death metal bands. Of course I enjoy bands as Unleashed, At the Gates, Dismember, Merciless, Repugnant, Entombed and Hypocrisy, but I also enjoy bands such as Candlemass, Gotham City, Heavy Load, Enforcer, Ghost and of course Bathory and Dissection. So if you found something Swedish in our songs it is from those influences, or it can also be by the fact that Europe and Abba songs played a lot in the TV when I was young.

What challenges did you face when making "Spiral of Obscurity"?

DeadOscar - Incorporating the effects on the bass in a band like Necro Chaos is a challenge for me. You want them to be heard but you sure don't want to put a blanket on the rest of the instruments. On the guitar it would be easier to control that because of its trebbly nature. I also have to be careful not to overuse the effects otherwise the impact is not that great. Because of all that I changed some stuff on spot while recording. Also the end of the "Spiral Of Obscurity" was done kind of ad lib, nowadays I would have done it better and crazier, the delay pedal I used was new and I didn't knew some of its intricacies. The general mixing was also a bit of a struggle between the bass presence and the effects. We came to the conclusion that we should have recorded them separately. Next time we will.

Morto - For me it was to record the vocals as it was my first time doing that. I had a little experience, some years ago, with two friends in which I started to play guitar and doing the vocals but it was only with Necro Chaos that i started to get more comfortable doing that. As for the process of doing the songs some flowed really well as others were a little more difficult to arrange.

Were there any creative differences compromised for the EP?

Morto - I don't think so, sometimes there are ideas that are proposed and we try to develop but if one of us is not happy with the result we change it until everyone is ok.

DeadOscar - We are quite democratic in our decisions and being a trio makes it easy. Most of the time we are unanimous.

The vocals are dynamic and convincing, how long have you been performing them?

Morto - Like I said in the other answer I had that experience for some months back in 2016 and then I continue to do that with Necro Chaos somewhere in the middle of 2018.

The music in general is also good. The riffing and drumming feel adhesive, who wrote the material?

DeadOscar - Morto comes up with all the riffs and then we do the structure of the songs and the arrangements in the rehearsal room. That's been the process for everything we've done so far.

Morto - We are all involved in the process of the composition of the songs, usually I came with some riffs and then we all contribute with ideas for the structure of the themes. As for the lyrics for now I wrote all of them but the other members feel free to do it if they wish so.

Deathminator - We've been friends so many years, and Portugal is not so big, everyone knows each other, we showed the material to them and they wanted to release it.

DeadOscar - There was 2 labels that we thought were interesting for us, one of them being Hellprod. Hellprod was the first that made a proposal, so it was also a case of "first come first served". One advantage between Hellprod and the other is that of a future cd release, so you can expect that soon. The Alcoholocaust connection also helped - of course (Deathminator being Thrashminator in Alcoholocaust) being Blaspher the head of the label and Alcoholocaust vocalist.

Hope all goes well with the release of "Spiral of Obscurity", thank you for doing this interview, anything to tell the fans?

Morto - Thanks a lot for the interview, it was a pleasure for us. If you relate to Necro Chaos just support the band, show up in our gigs and create some chaos. Cheers to all!