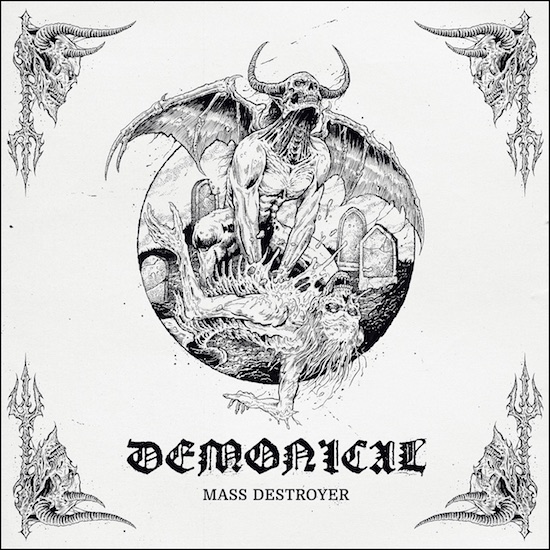 Whoa, Swedish Demonical have great plans with their new output Mass Destroyer if you take the opener 'We Conquer The Throne' literally. This track doesn't take any prisoners and is straight in your face Swedish old school HM-2 death metal with some Maidenesque riffing that does not show any compromises. This makes the listener pretty curious what will happen in the following 7 tracks which altogether have a total running time of about 34 minutes. Considering the predecessor World Domination where not everything was top notch ('Slipping Apart' was a pretty huge disappointment) some people may fear that on their 7th full-length another failure might have crept in. But just to put you at ease - there isn't such a track to find here.

The Swedes have composed eight really catchy and powerful tracks with a lot of melodic stuff inside but they never leave the death hand path. Of course they don't reinvent the death metal wheel but to be honest, why should they? Mass Destroyer has all the trademarks that Swedish death metal album needs and combines all the stuff that more popular bands like Dismember, Entombed (and in some cases also more classic influences like Black Sabbath or the already mentioned Iron Maiden) already performed. But don't take this as a point of criticism because it isn't. Demonical are a part of the Swedish scene much too long for us to be able to accuse them of copying any of the bands and they do have their own style and exercise it here with absolute perfection.

Tracks like 'Fallen Mountain' with its ultra-melodic chorus and the mid-tempo arrangements around it or the other quite atmospheric song 'Lifeslave' with its threatening riffing that appears like walls coming closer around you makes the shivers go down the spine. On the other hand there are some faster and more punkish songs like 'Wrathspawn' (the lyrics kinda like rhyme or die, fantastic!) or the fantastic closer 'By Hatred Bound' with galloping drums and a wonderful pace. One of the best tracks to go running I've heard in awhile! If (old) Manowar would have written death metal they would have sounded like this!

The production is as powerful and pressing as we are used to from Demonical and so there are no really big points of criticism about Mass Destroyer. Maybe the running time appears to be a little bit short but on the other hand, if they would have put a weaker track on it to get 40 minute running time, it would have spoiled the album.