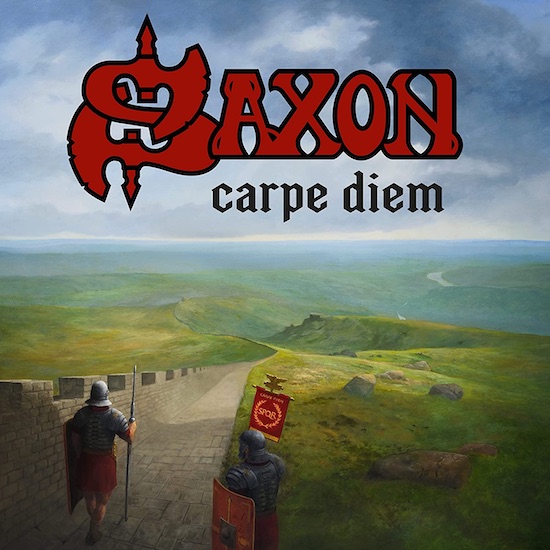 Carpe Diem – Seize the Day. I guess this is quite a good motto that Saxon have chosen for their newest (their 23rd!!!) studio album. I would say that they sound powerful and heavy like they didn't sound for many years on this output and so they have done the best out of the situation. Most of the tracks are pretty fast or in some upper mid-tempo area and full of awesome guitar solos that let you be astonished that these guys still have such energy for this after all those years. I mean, they are not getting younger, if you know what I mean. If I didn't know that it was Saxon I would guess that some guys in their 30s/40s are performing a pretty great classic heavy metal album.

The album starts with a very catchy banger which is also the title track. I would state that this is a perfect opener for an album because it puts you in a right mood for this. Very casual riffs come along with a well-timed drumming and Biffs vocals do the rest to create a future Saxon classic. 'The Age Of Steam' is another very appealing track that reminds me quite a bit of Rammstein's “Deutschland” right at the beginning. It's another very melodic track with a furious chorus and again you can get quite easy into it. By the way the story that is told here (about the industrialization) is pretty nice to follow. There are quite a couple of tracks that keep up this mid-tempo style and are really great bangers like 'Super Nova'. I would say that this is one of the heaviest tracks that Saxon have ever written. The guitar riffs are razor sharp and quite brutal and I have to admit that the track reminds me from its riffing and the chorus of my Judas Priest all-time fave, that one with the ugly motorbike on it, you know for sure! Another track that I would like to mention is 'Dambusters', maybe not because of the music (though it is a really good one with a lot of Rock n´Roll flair- Lemmy would love that one for sure) but because of the lyrics. It is quite an interesting topic from WW2, when British bombers were sent to Germany to bombard the dams of the water reservoirs in the Sauerland and Hesse to harm the Ruhr Area and other parts of Germany because there was one of the hotspots for the war industry. This is quite an interesting story that the one or the other may like to read about in more detail.

On the other hand there are some slow tracks on Carpe Diem, too – namely 'The Pilgrimage' and 'Lady In Gray'. While 'The Pilgrimage' is a quite outstanding track that sounds a little bit like 'Crusader' and appears to be very catchy and groovy (combined with some “Hells Bells” vibes). But 'Lady In Gray' is the only track that I can't get used to. It sounds quite lame and boring in my ears and really doesn't grip me. May it be because of the half-hearted synths or the somewhat generic chorus, this track just splashes along without too much excitement in it, sorry. I would like to state that just one weaker track on this album isn't so much worth to criticize even because all of the other tracks are very rousing and make the album a very entertaining event.

Hopefully Saxon will keep this power they preserved on Carpe Diem for some more years and present us more of this stuff!!