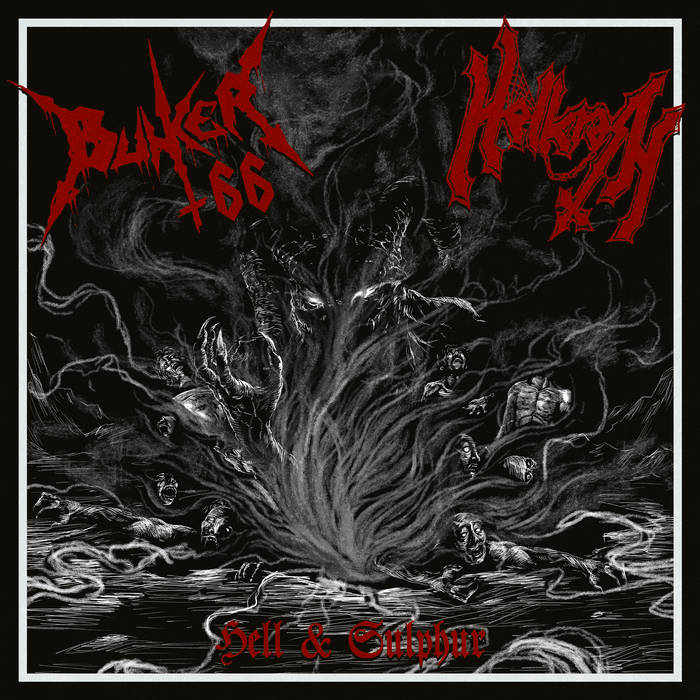 Have you seen it? Bunker 66 release split after split. That’s cool, but it’s also a bit like grandmother dying. “Granny, please tell us the secret of your fantastic apple pie, before you die. What’s the recipe?” She whispers with her last breath: “Always a little too little.” Indeed, small portions can make things more valuable. Nevertheless, when it comes to Hell & Sulphur, it would have been fine to get more than only seven minutes music in total.

Be that as it may, Bunker 66 contribute another casual track. It is built on the same formula as the songs of their last full-length. Cool riffing, dominant mid-tempo but also an outbreak of high-speed and vocals that convey a lot of dirty atmosphere. Usually, I expect a proper dose of insanity when it comes to black thrash, but Bunker 66 satisfy my needs even without this element. Instead, Motörhead shimmer through the tones of 'Pandemonial Storms', a song that profits from its pretty transparent yet powerful production. All in all, this is good piece, but it stands doubtlessly in the shadow of the highlights of 'Beyond The Help Of Prayers'.

Hellcrash complete the Italian syndicate. “Hell Breaks Loose” sounds raw. The mix is less clean than the one of their split partners, but not ill-defined. What they have in common with Bunker 66 is that they also cannot deny a punk / filthy rock ‘n’ roll influence. The song avoids experiments and its conventional verse-chorus-verse scheme is anything but surprising. In other words, Hellcrash do nothing wrong, but they cannot fully convince me as well. There is no component in their song that makes me curious for more. So it’s 60% for them and 74% for their partners in crime. And now I would be happy if I could get a piece of grandma’s apple pie.