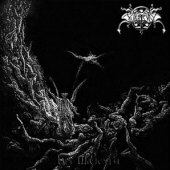 Evil has many forms and one of them is presented by Svartsyn. An underground-compatible production paints an ominous, archaic picture. The nearly opaque mix lacks clarity, but it generates such an unholy atmosphere that any type of minor flaws can be neglected. Those of you who love to walk through clammy underground passageways will know this special kind of shower running down the spine and here presented sound brings this feeling to life, even though one is sitting in a well-tempered lounge. Of course, this kind of reverberating sound has never been a state-of-the-art production, but it fulfils its purpose.

Svartsyn have always been disciples of the darkest art and it goes without saying that ...His Majesty also does not know any other color. This is pristine black metal with a great portion of hatred and misanthropy, even if one considers that the sub-genre has never taken care for the bright side of life. Either way, I am confronted with high velocity outbursts and sometimes I have the feeling that the guitars always play the same tone. That's surely nonsense, but from my point of view, the material lacks a bit of diversity, even though highlights like "Dungeons" or "I'm Cleopatra's Killer" shine with some morbid lines. To say the songs are interchangeable might be too harsh, but significant differences between them are mostly also not identifiable. By the way, this statement applies for both, style and, to a certain degree, quality. Perhaps it was part of the concept to create an unending stream of cruel guitar tones? Either way, Svartsyn do not disappoint. Their fury, ferocity and determination reflect the spiritual fundament of the sub-genre. Nevertheless, the combination of the pretty complex song patterns and the impenetrable sound challenges the listener, inter alia due to the total absence of parts which keep sticking in the ears immediately.

But maybe I am just a fast-food-music-consumer and therefore I should be fair with records like ...His Majesty. Moreover, it belongs to the early works of the Swedish ambassadors of evil. Hence it comes as no surprise that a few sections are going nowhere, for example some guitar leads of "It Breathes". Svartsyn have put their pitch-black souls into the creation of this album, they spit on atmospheric keyboards, female vocals, acoustic guitars and further pretty superfluous ingredients. That's great, I like their stubbornness as well as I like this full-length. It's an album for special hours and no easy-listening-black-metal, it rather calls for total concentration of the audience. However, I am sure that most of us have become metal fans exactly because of the willingness to consume music very attentively. Thus, it's up to you to decode ...His Majesty. It needs a lot of devotion, but it is worth the effort.