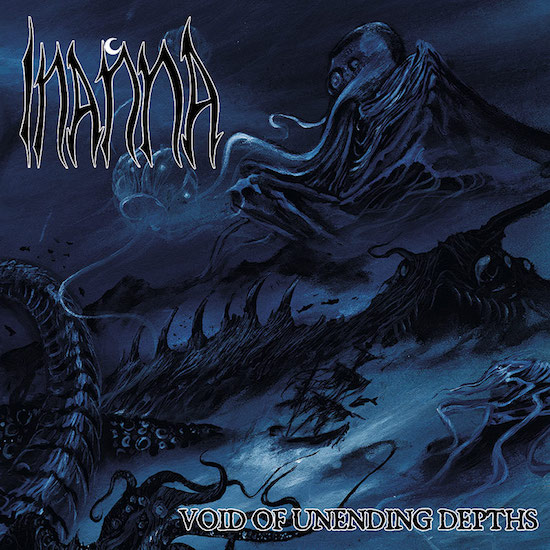 To be frank, nothing in 2022 has truly blown my socks off yet. There have been a few really strong albums that I remember well and will keep coming back to, but I haven't heard an album yet that just made me sit there in awe for a few tracks, completely locked in and unable to turn it off, immediately knowing it would be an AOTY contender…well, until now anyway.

Inanna are a Chilean band that is well regarded, albeit obscure as they've been relatively inactive for a decade. Their style, while multifaceted and amorphous, is relatively easy to describe because of the distinct flavor the guitars have: it's like a more melodic Immolation, with the vocals in particular mimicking Dolan's tone and delivery. This is balanced out with wandering, progressive thrash sections, comparable to The Chasm with extra psychedelia. It's maddening and discordant, with incredible builds into wild, layered atmosphere grounded by addictive guitarwork that doesn't forget to riff. Suffering Hour is one of the few modern bands I could say this reminds me of, and even then, there's much more of a "death metal" vibe with this overall. In fact, the band adamantly rejects any subgenres to describe their music other than "death metal", full stop. This is despite the fact that their music has a layered, almost ethereal and uplifting vibe at times owing to what are almost certainly 70s prog influences. In the end, the resulting atmosphere is exactly what death metal should be: that entropic, undefinable thing Cynic, Immolation, mid-era Death and Atheist were going for, but with a facelift informed by some tricks from the modern underground.

Void Of Unending Depths arrives 10 years after their stunning sophomore full-length Transfigured In A Thousand Delusions, on an up-and-coming label focused on the spirit of the oldschool that seems to operate exclusively through mailorder, in an apparent attempt to recreate the early days of buying albums online. It's a fitting means of promoting an obscure yet highly regarded group such as this - even the experience of acquiring this album has an OSDM aesthetic. With a band like this that releases albums at the pace of Funebrarum and makes you hunt for physicals of their stuff, you know whatever they do provide you is going to be nothing but absolutely top notch shit.

This third album does come with slightly more streamlined rhythms and a more vacuous, drawn-out atmosphere than the technical, riff-driven maelstrom that was the previous full-length. This may be due to the band's first-ever significant lineup change - longtime skinsman Felipe Zara apparently left the band prior to this full-length after 17 years of service. He left behind some incredible performances and tough shoes to fill. No worries! Since Inanna are better musicians than you (and also probably realized it's easier to replace a guitarist than it is a drummer), guitarist Carlos Fuentes just said "fuck it, I'll do it" and switched to drums himself, and you barely notice the difference. His performance is more than competent and serves the music incredibly well, and the band shifted from aggressive to brooding to accompany the shift in playing style, which opened the door for even denser harmonies and more powerful emotional climaxes.

Like any truly great album, there are no weak songs, each new track brings its own distinct vibe and has a different reason why it's great. Opener 'Evolutionary Inversion' has a melody and constant sense of catharsis so beautiful it nearly brings you to tears…and then the second track completely switches gears and pulverizes you with nasty, ripping tremolo and chugs straight out of the 80s with some of those Chasm vibes spliced in. 'The Key To Alpha Centauri' has a phenomenal sense of pacing and slowly adds more melody and contrasting elements to create a surreal and powerful atmosphere, and the epic closer 'Cabo De Hornos' feels half as long as it does and has a terrific middle section packed with some of the tastiest licks on the album.

I'm not going to jump the gun and call this my 2022 Album of the Year right off the bat, but if Void Of Unending Depths doesn't at least place in the top 5, that means it's going to be an unprecedentedly amazing year for music, let me put it that way. This is stunning, I don't want to listen to anything other than Inanna and I'm probably going to have this feeling for weeks, and I'm also going to desperately track down any physicals of their discography and hope they don't end up costing me hundreds of dollars. What a fucking album!