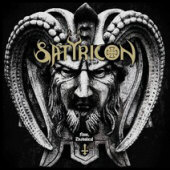 Buy on: Bandcamp
Type: Full-Length
Release Date: April 14th, 2006
Label: Roadrunner Records
Genre: Black
1 Now, Diabolical
2 K.I.N.G
3 The Pentagram Burns
4 A New Enemy
5 The Rite Of Our Cross
6 That Darkness Shall Be Eternal
7 Delirium
8 To The Mountains
MetalBite on YouTube
MetalBite on YouTube

Satyricon's reputation is, in my humble opinion, much bigger than their music. Not to mention their attitude. How much black metal is in their heads and how many commercial thoughts? Indeed, the dudes released a monument of Norwegian blackness. Needless to say, that I am talking of Nemesis Divina. But this masterpiece was released in 1996 and how long can you rest on your laurels?

Now, Diabolical starts strong, but it is an ambivalent work and all in all, it prolongates the row of underperforming Satyricon outputs. It houses songs that try to score with rather primitive patterns and some of them are reduced to the essentials. Unusual effects do not show up. It seems as if the duo has challenged itself: can we create a hellish atmosphere without any gimmicks? Not really. Wide parts of the album obey to a pretty tedious one-tempo-approach. This is not K.I.N.G., this is T.I.R.I.N.G., to express it politely.

Speaking of "K.I.N.G.", this piece belongs to the trio at the beginning of the running order. No doubt, this start program creates a pretty demonic mood and a catchy chorus like that of the title track shows that the band knows how to take advantage of the dogma "minimum effort, maximum result". But listening to the entire album makes painfully clear that this approach does not build a solid fundament for nearly 45 minutes. Some tunes remain blatantly meaningless. The guitar leads of the closer are dragging on and an. It has a playtime of eight minutes and nobody knows why, because everything is said after the first three or four minutes. And what was the intention behind the recording of the calm parts of "The Rite of Our Cross"? Maybe it is not fair or an ironic twist of fate that I pick out a song which has the most heterogeneous structure after having mentioned the lack of tempo changes. But breaks, only fools do not share this opinion, are never an end in itself. With that said, it cannot be ignored that the very low degree of intensity marks another disadvantage of that song.

By the way, "Delirium" also holds some very calm sections. They sound like the blurred visions of a confused Norwegian in an overcrowded Dutch coffee shop. The guys of Carpathian Forest like these sections, because they also have some of these strange sounds in their portfolio. But the next dope control is probably just around the corner and I don't want to become the plaything of some policemen gone mad. These dudes should rather take care of talented musicians who release quite half-baked works. Admittedly, the coherent and vehement "That Darkness Shall Be Eternal", the late highlight, spreads almost violent vibes. Nevertheless, this work does not match my understanding of black metal, inter alia due to the sterile touch of the general approach and the equally lifeless production. Don't get me wrong, I am listening to an album with a professional mix, but everything is so miserably mature that the true spirit of black metal lies buried beneath the hundred layers of this maturity. Euronymous would hate Now, Diabolical, but I am a little bit more tolerant.