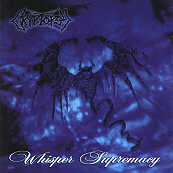 Talk about brutal/technical/grind frenzy, this album is all over the place. However, it does mesh together in unison. The rhythm guitars are hard to follow because of their complexity, something that takes a few listens to before they kind of sink in to your brain. There's a lot of tremolo picking going on here with chords and single strings, and everything is mixed well though, which is good because to have a bad mix to an album like this would do it a great injustice from all aspects. I would tend to go with this as Cryptopsy's finest work. You may disagree, but every album a band puts out is subject to speculation and criticism. As long as it's constructive, it's good.

8 tracks of just sheer brutality. The vocals are a combination of deep throat/somewhat screaming, but not to an extreme. Mostly deep throat. Lord Worm was replaced on this one, but still the vocals go well with the music. They're not drowned out in any sort of aspect. The leads on songs are technical and some even go into part of the vocals, if you can imagine that! But really, both guitarists show true talent and the originality on this album and is what makes it so likable. Nothing that I've heard in the past or present is like this, only for a couple of albums, maybe some Suffocation.

To not like this means that you have a despicable attitude towards extreme music. There aren't a whole heck of a lot of blast beats, just a lot of tempo changes and mainly fast guitar, but when the double bass drums and blasting are going on, you can still hear the music. Never been a fan of the lyrical concepts, but they do fit with the music quite well. I'd say the horror, death, gore, etc. suits an album or band like this. I don't think that anything they put out can equate to this. There is just so much energy and originality going on here. I think that this does justice for the entire genre of extreme metal. I have not heard this album in years, either! It's amazing that these guitars seem to fly all over the place and the leads again were well done, fast and furious with both guitarists contributing on that front.

So yeah, get a taste of severe divinity. It's worth it. Maybe extreme metal is not to your liking, but that doesn't make this effort something to damn. Nothing is ruined by anything here. Not the vocals, production, or musical quality. Check it out!

In 1996 Cryptopsy unleashed one monstrous album upon us. “None So Vile” was a shining moment in the scene, as well as for the band. It is a difficult job to compile an album to have that same effect twice. So, the band fell a little short – but for only a few reasons. “Whisper Supremacy” is an album shunned by many, and hailed by many. But forget what you’ve heard about this album, because it’s awesome. The final decision should be made by the listener, though, not the fans with the overly high expectations.

Very much similar to ‘96’s “None So Vile”, “Whisper Supremacy” follows up with that same unrelenting death metal that only Cryptopsy know so well. Not taking any detours in their musical exploration, it’s a relatively safe record for the band to release, yet with some improvements and some not so good factors...

What is this? No Lord Worm? So, after “None So Vile” Lord Worm took a permanent break from the band to spend time in the brewery business. Respectable, I guess... anyway, Lord Worm thought that the vocal duties would be handle best by Mike DiSalvo. Well, many fans were outraged by his vocal performance, understandably. DiSalvo is more of a hardcore vocalist, and that’s quite a difference compared to Lord Worm’s indecipherable but unbelievable fitting vocal approach. DiSalvo doesn’t quite fit the music, honestly. But, really, if you let this get to you you’re missing out on one hell of an album. That’s really the only problem with the album, in my mind.

Musically, this album is just amazing. It shows the band taking a step up in performance, musician-wise. The composing is excellent, the band member’s performance is top notch, and the ideas are all high above the rest of the scene. “Whisper Supremacy” is “None So Vile” all tidied up.

Bottom Line: The problem is, “None So Vile” was amazing and it has this great intangible something that made it awesome. It will always be a landmark release in the death metal genre. In it’s own right, though, “Whisper Supremacy” is a great record that if released under another name, would be praised and then praised again.