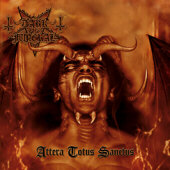 I am sure that every upright reviewer tries to be objective, but honestly speaking, this is an impossible mission, at least in my case. Both "Diabolus in Musica" and "God Hates Us All" were a sheer disaster and therefore I was very lucky after having heard the first songs of "Christ Illusion", but I would have been slightly disappointed if Slayer had released this album directly after their masterpieces "Hell Awaits" and "Reign in Blood". Attera Totus Sanctus was and still is a disappointing album, maybe not in objective terms but with regard to its creators, because Dark Funeral have forged much better outputs. The perfect Vobiscum Satanas is just the tip of the iceberg.

Well, let's ignore the ridiculous artwork, even though it would be interesting to know why their blue albums are always better than their red ones. The fourth full-length of the Swedish lumberjacks reveals many deficiencies. The production, for instance, is professional yet blurred at the same time. There are not many details to identify, I am listening to a constant noise without any remarkable ups and downs. This devilish inferno kills any trace elements of melodies and results in interchangeable songs. I admit: it is still Dark Funeral and the band sounds neither experimental nor false. Nevertheless, the black excellence, usually created by the combination of uttermost vehemence and hellish harmonies, does not shimmer through the pieces and no single song is able to challenge their classics. Nobody is willing to "Open the Gates", "The Ineffable King of Darkness" sits at home and watches Lucifer TV and the group also does not return to the place "Where Angels Forever Die". The songs are destructive, beastly and ferocious, but simultaneously a tad flat, emotionless and faceless. They pass by without leaving a perceptible impact and they are not able to create their own identity. Especially a certain degree of catchiness is missing. The here presented hailstorm with a duration of 43 minutes mirrors the uncompromising and laudable attitude of the Swedes, but it does not prove evidence for outstanding compositional skills.

No doubt, the inputs of each and every band member do not suffer from grave mistakes or technical inadequacies. Just focus on lead vocalist Emperor Magus Caligula (I love this pseudonym...). He expresses the necessary level of aggression, harshness and hysteria. But he fails to vary his voice and so his performance does not fully convince. His pretty monotonous approach matches the constant, more or less ineffective hyper-velocity. The fifth track is the first one where the band slows down the pace. Too bad that the guitar lines of "Atrum Regina" also fall short of expectations. Don't get me wrong, I am not speaking of musical declarations of bankruptcy. Nevertheless, a slightly stale taste cannot be ignored while listening to the tracks. By the way, the lyrics are also questionable. Is it really the be-all and end-all to sing about attacking angels that are slain and to call a song "Angels Flesh Impaled"? Venom's "At War with Satan" already covered all aspects of the battle between good and evil - and this album was published in 1983. Moreover, the massacre's description of Dark Funeral has a puerile touch, while Venom's story was highly effective and simply breathtaking.

After nearly 43 minutes, Lord Ahriman and his soldiers lay down their weapons and I cannot speak about highlights or low points. I appreciate the material's vehemence and power, but I miss depth and exciting riffs. Anyhow, I take comfort from the fact that this pretty average output is still much better than the flops of Slayer or Venom ("Calm Before the Storm", "Hell"). So it's up to you to decide whether or not you want to lend an ear to this work.