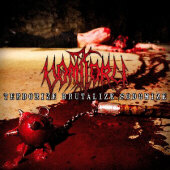 Sorry, I’m dead. I was on my way home, everything seemed to be peaceful and I wanted to write just another little review. But all of a sudden, a massive rock with a weight of ten tons fell out of great heights and killed me. Tough luck, it had been nice to be part of the metal community.

…sorry once again, right now I have realized that I am still living. The massive rock that hit me was no rock, but Terrorize Brutalize Sodomize. This outburst of violence has the same effect. Vomitory, the epitome of furious Swedish death metal, dishes up an opener that seems to catapult the listener straight to his or her personal Armageddon. Of course, machine gun fire drums and a bomb carpet of guitars is nothing extraordinary in terms of pretty extreme death metal, but the material of Vomitory always seems to be more intensive than that of the myriads of their competitors, within and outside their death-affine home country. This is the first feature that distinguishes them from stylistically comparable gangs. The second one is their instinct for hellish harmonies which are created on the most brutal sounding guitars. Unfortunately, they are not generous with this feature on Terrorize Brutalize Victimize.

Of course, 'Scavenging the Slaughtered' combines the trademarks of the band very excitingly and it almost goes without saying that there are no rotten eggs among the ten pieces. Moreover, it is fun to realize the spiritual bond between Vomitory and Bolt Thrower which is brought to light by the first tones of 'March Into Oblivion'. They do not send greetings to the British legend for the first time, just remember 'Eternity Appears' from Blood Rapture. No doubt, if Jo Bench listens to this album while drinking her daily tea in the afternoon, she will realize her sympathy for “Terrorize Brutalize Don’t Tell Lies” very quickly. Yet still something is missing compared with their masterpieces from 1999, 2001 and 2002. The last ounce of compositional excellence is missing.

The sepulchral voice of Erik Rundqvist lacks diversity, but I don’t think that this is a problem for any true death metal maniac worldwide. Of higher relevance is that Vomitory always finds the perfect balance between technical precision and juvenile rumbling. Additionally, they profit from the full, direct and voluminous sound. I guess it is no surprise that the production of a more or less well known Swedish death metal horde does not lack power. However, this high-quality sound deserves to be mentioned.

Vomitory slice, hack and grind through the ten songs and while doing so, they show their integrity and conviction. No fan will be disappointed when listening to “Terrorize Brutalize in Your Holes I Push Some Mice”. The four-piece plays in its own league, a league that Grave and Entombed left after their debuts, a league that second tier bands like Entrails will never reach. Even a dragging and not overly thrilling piece like 'Whispers from the Dead' has more charm than comparable songs of the bands with a similar approach. And believe me, the corpses have to whisper pretty loudly in order to be heard during this celebration of elemental forces that Vomitory offer – especially during the following 'Heresy' and 'Flesh Passion'. They pummel the audience with an insane degree of brutality. Honestly speaking, I don’t like the genre-typical “aesthetics” which is reflected in the blood-soaked booklet, but I confirm that this kind of music justifies the visual concept to a certain extent. Thus, I recommend “Terrorize Brutalize Bloody Cries” and if the re-united dudes decide to record a new studio album, I will be back here – or I’m dead.