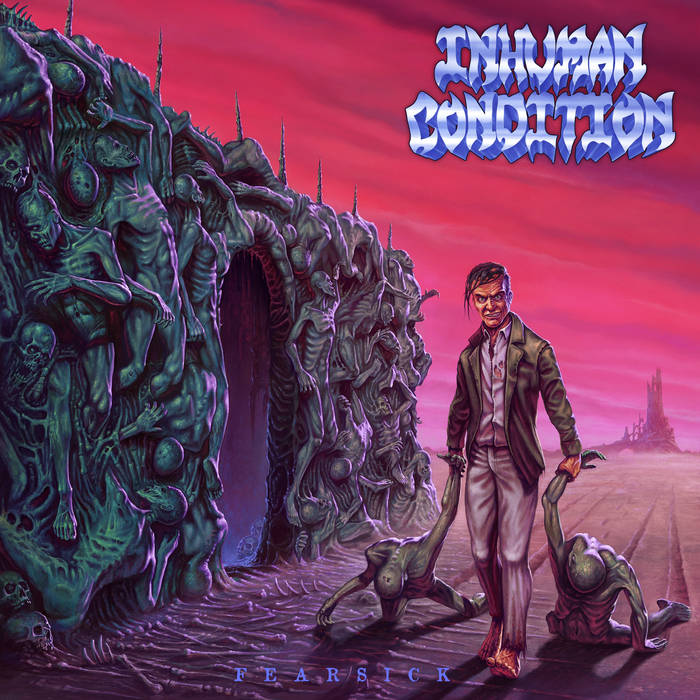 One year has passed since Taylor Nordberg, Jeramie Kling and Terry Butler collectively known as Inhuman Condition released their amazing debut Rat God. Now they are back with its successor Fearsick. The cover was again created by Dan Goldsworthy, album was produced by Inhuman Condition vocalist / drummer Jeramie Kling and surprise, surprise the music hasn't changed too much.

The album starts with 'The Mold Testament' which is a nice mid-tempo stomper. The following track 'Recycled Hate' is much faster and it surely won’t disappoint anyone who is into Floridian death metal. Jeramie Kling's vocals sound pretty badass and the riffing is old-school as fuck. 'Now I'm The Monster' is another great catchy track where you can clearly hear some Obituary or Death-like riffs and some pretty sick guitar solo. 'King Con' starts with a pretty nice surprise - some atmospheric intro with some piano sounds but, don't be afraid, it's just an intro. Afterwards the track becomes a very traditional death metal wrecking ball. 'Wound Collector' is a creepingly bone breaking song where Jeramie's vocals sound even sicker than on the other eight regular tracks. Closing with 'Where Pain Is Infinite' which is a calm and atmospheric song, the album is way too soon over and invites to press the repeat button. By the way the band had a pretty cool idea for this new release. Each version has a different cover song as a bonus. The US version (distributed via Listenable Insanity Records who also distribute the Mexican and European edition) comes along with "Whiplash" (Metallica), Mexican edition has "Magnificat" (Benediction) and European edition "Pull The Plug" (Death) as bonus. "Surprise! You're Dead!" (Faith No More) can be found on the South American version (distributed by Rapture Records) and on the Japanese edition (distributed by Spiritual Beast Records) you can enjoy "Executioner's Tax" (Power Trip).

All in all, the trio didn't invent something new but what they created with Fearsick is a very entertaining and well-produced album that is pretty old-school and which won't disappoint any death metal head. I'm already looking forward to the next album and if they keep this creativity up it'll be out (hopefully) by next summer!!