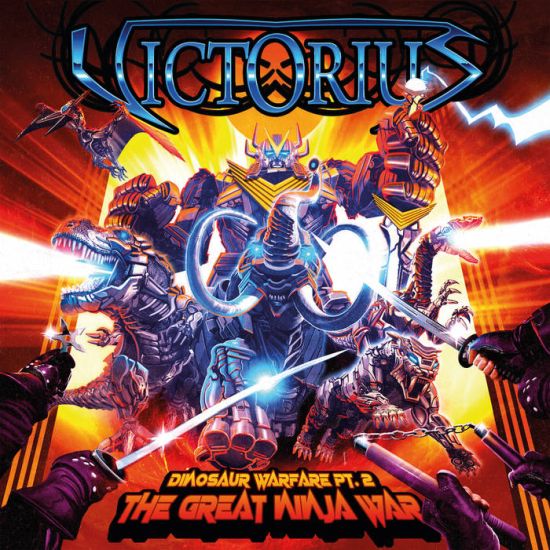 So we're back to dinosaurs, but are we back to the good ol' times? This particular question has been burning in my mind ever since the band released the cover art.

Most certainly, Victorius is growing to be one of the most ridiculous bands in the genre. Meaning no offense, and personally I do enjoy a bit of cheese with my power metal. But considering how I still regard their debut as a true masterpiece, you'll understand my growing disappointment with these Germans ever since they released that Dinosaur Warfare EP. Besides, their last release was probably their weakest. So I had looked forward to this one with part anticipation and part dread. Well, both feelings were not entirely justified after my first listen, yet they still existed. But I'll say this - Dinosaur Warfare Pt. 2 – The Great Ninja War is definitely a step up from their last disastrous LP.

The album started with an would-be-epic synthy intro 'Saurus Invictus Lazerus' (for fuck's sake what does that even mean?) and some video games sound effect samples - at least this was better than that ridiculous narrative outro, though the narrator dude did still came out for a bit on 'Victorious Dinogods' to call upon us to fight the space ninja... Really, the trademark of Victorius by this point is definitely their highly ridiculous song titles and entirely ludicrous lyrics. Or you can call them cringeworthy, I find the line pretty thin here. I mean, look at that bloody tracklist. 'Mighty Magic Mammoth'? 'Night Of The Nuclear Ninja'? 'Tricep Ceratops'? Though none achieved the briliance of 'Astral Assassin Shark Attack', they're still nonsensical enough to convince me that this is probably another album with the typical Victorius humor. Honestly, how could you not mentally form a sloppily photoshoped image of a colorful ceratop's head connected to a black-and-white photo of the body of a muscular man lifting weight when you heard the chorus of 'Triceps Ceratops'?

Well, cheese aside, musically speaking this is still very much their old mix of Dragonforce and Gloryhammer. You know, we've got some punchy riffs, generally fast and energetic drums, some flashy solos, and, inevitably, super upbeat, super catchy choruses. Indeed my opinion had immediately improved when I'd noted the significantly lesser use of synth on this album. Sure, they'd still popped out on a few tracks like 'Jurassic Jetfighters' and 'Dinos And Dragons', but none of them were of the likes of 'Cosmic Space Commando Base' or 'Shuriken Showdown', So I rest assured.

In fact, some of the songs really put me more mindful of their older and finer works more than anything else. I mean, I could totally replace 'Virus' with the same powerful rocker 'Katana Kingdom Rising'. Tracks like 'Jurassic Jetfighters' and 'Gods Of Roar' really brought back the vigor they'd had on the Dreamchaser album. Though of course 'Shadow Of The Shinobi' still referred back to Space Ninjas From Hell both musically and lyrically speaking. Indeed some of the less melodic parts on tracks like 'Mighty Magic Mammoth' are still quiet Space Ninja-ish.

Now, the answer to my question of afore: I don't think we're quite back there yet. But I'll feel safe in saying that this is a release that will satisfy the less zealous Victorius fans - at least this was less formulaic and less cringeworthy in concept. Still, I wasn't all that enthusiastic to become a space ninja before, and I'm equally reluctant to face my transformation into a dinosaurier right now.