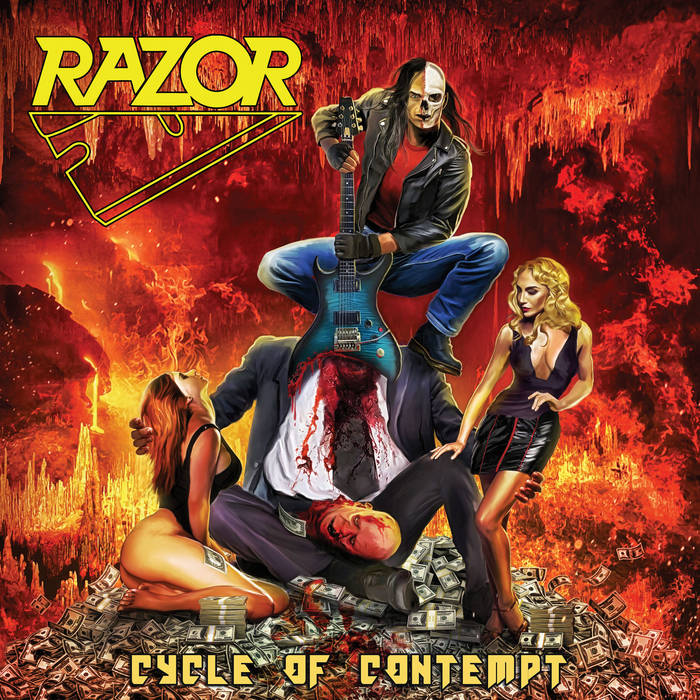 The Necrodeath offshoot called Sadist already knew it on their debut from 1993: sometimes they come back. But what they didn't reveal was that this also applied to their peers. I admit I did not know so far about the sadistic tendency of Dave Carlo and his comrades, but their comeback album brings it to light in a matter of seconds. 'Flames Of Hatred' is probably one of the worst thrash album openers of all times. Feeble guitars appear after a stupid intro, their riffing is expressionless as it can be and the chorus completely sucks. But the worst is yet to come: the vocals of Bob Reid are unbelievably disastrous. This guy has lost his complete vocal strength. Only a hoarse, boozy caricature has remained. Needless to say that his anti-performance also affects the further songs. Why doesn't someone like him just lie down in bed and reminisce? I have no answer to this question. I just know that this opener is perfectly aligned with the painfully embarrassing artwork. At some point beyond the age of 50, one could develop a minimum of aesthetic sensibility.

Okay, things get better as the album progresses. The pieces are straightforwardly designed. Some of them sound like forgotten tracks of the Decibels recordings. If I try to ignore the vocals, songs like 'Off My Meds' almost make fun. But on the other hand we have to go through a track like 'Crossed' with its terrible staccato parts that sound like the creation of a newcomer horde which has never heard of talent, skills or potential. The following 'First Rate Hate' is a hot contender for the title of most boring thrash song in 2022, even in view of its speedy last minute, but who knows yet what's to come.

Okay, Mister Bob one-tone-fits-all Reid fails all along the line, but what about the other guys? Well, a new guy sits behind the kit, but the drumming is as primitive as it has even been. It’s a prime example for this kind of stupidity we call “uffta-uffta” drumming in Germany. Dave Carlo, you see, I do not want to forget the positive aspects, comes up with some wicked riffs (and some vapid lines as well), but the production loves the drums more than his guitar and therefore his more or less good ideas get lost in the sound. And the bass guitar… well, did they record the contribution of Mike Campagnolo? I’m not quite sure, it just has its ten seconds of fame at the beginning of 'Punch Your Face In', a pretty good song (if a singer had been involved who was not yet rusty on the siding).

In terms of style, Razor still sound like they ever did, but they almost never reach the form of their previous works. Generally speaking, the shorter tracks ('A Bitter Pill', 'Darkness Falls') have more impact and dynamic than the longer ones, but today there are so many better thrash bands that it’s nearly a shame to release such a mediocre, significantly flawed album under the name of a legend. Loyal souls will nevertheless like certain aspects and some songs of the album, even though the closer, fittingly titled 'King Shit', seems like the ugly twin brother of the opener. Which brings us back to the beginning with the sadists, so to speak, but my need for bondage is more than covered for today.