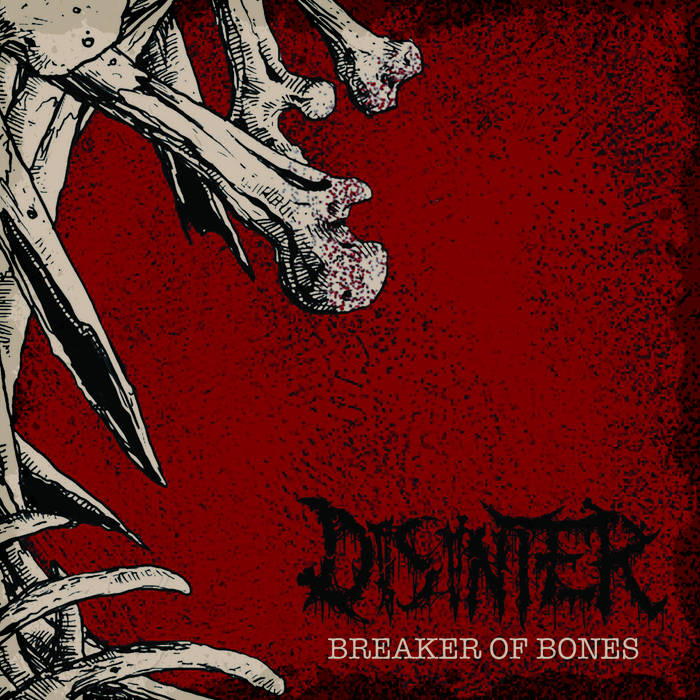 I was pretty surprised to get a new Disinter promo in my mailbox, I have to confess. Actually I didn't know that they are still active but they are and they are active as hell on their 6th full-length album called Breaker Of Bones! A lot of things have changed in the band, with Jon Billman they have a new bass player, Max Colunga is their new drummer (both since 2015, so “new” is relative) and the most important change comes with Casey Loving as front grunter. Just to keep you updated about the band interna. But now let's talk about the music...

Disinter changed their style a little bit on Breaker Of Bones. They have some more classic US death metal influences like Morbid Angel (especially in the guitar soloing) or Cannibal Corpse as they had in the past but they combine this very smart with a mix of some slight punkish drumming here and there, some more groovy death metal parts and also some more technical brutal death stuff. All together this makes this album a really interesting piece of old school death metal which is very much enjoyable and doesn't get boring for a second during about 38 minutes of total running time. Disinter manages it quite smart to not fall into sheer chaos in their compositions, sometimes it seems to be a total bedlam but after a few seconds of absolute brutal thrashing they find their way back into more organized structures.

Although the album as a whole is very enjoyable, there are some songs that kept my attention a little bit more because they have that certain special something if you know what I mean. First of all the title track is a brutal technical monster with such finesse that it really makes fun listening to it. The groovy parts which are combined with faster stuff are fantastic. If I should compare it to any similar bands, I would say that it sounds pretty much like newer Cannibal Corpse – that may also be due to the vocals which are quite similar to Corpsegrinders. Another very interesting track, especially because of its piano arrangement in the beginning, is 'Cold Cell Torture'. This is a good example of how close beauty and disgust lie beneath. This is a mid-paced and very catchy song with a lot of staccato-like riffing and a great double-bass inferno. 'Bring All Of Hell' shows their more punkish side that I mentioned before with the drumming tact and will probably be a bad-ass song for the mosh pit.

With Breaker Of Bones Disinter have created (at least in my humble opinion) one of the best albums in their 32-year career (with some breaks) and one of the best US death metal albums in 2022 because of the high number of breaks, twist and turns and the very good and powerful production. I hope that this will not be the last one they did and I hope that they will get some more publicity than they did in the past. So now go and let'em break your bones!!!