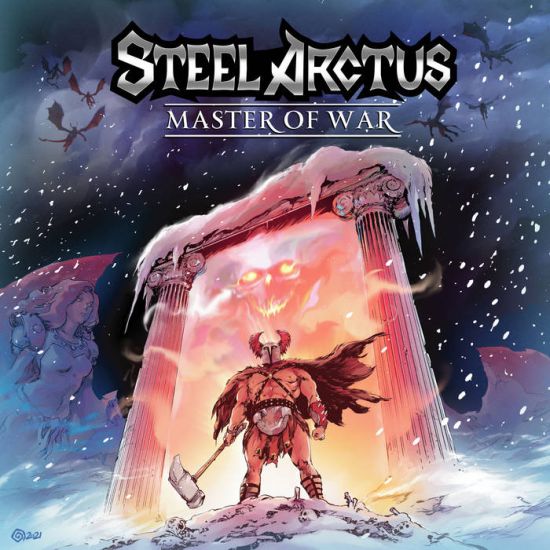 Greece is known as the cradle of civilization, but nowadays it really should be known as the modern cradle of triumphant epic heavy metal. For some reason the 2020 debut of these guys went under my radar (a mistake I was quick to remedy as it proved to be kickass) but Master Of War caught me by surprise!

On their second attempt, Steel Arctus manage to evolve, polish and take all the right steps towards their eternal search for a masterpiece. Balancing between USPM and the EU side of the Atlantic, they offer a great mix of old school heavy/power metal, mostly driven by the soaring vocals of Tasos Lazaris and the catchy choruses. The songs have an overall nice balance between the more epic/grandiose moments and the Judas Priest heavy riffing formula and the whole band has brought their A-game. Special mention to the folky 'Cry For Redemption' which utilizes bagpipes (!) and was a very welcome surprise that added some diversity.

Nash G’s guitars do most of the heavy lifting with an abundance of riffs and a very sweet tone, the bass and drums nicely form a concrete rhythm section, but the undeniable show stealer is Tasos Lazaris and his over-the-top vocal performance. I was very impressed back when I reviewed "Atlantis" from his other band, but here he is on a whole other level. Great memorable vocal lines and choruses, fantastic sense of harmonies and some impossible notes, I think that between this and his other stellar performance on “Battle Symphony” (to be reviewed soon!) he is proving to be one of the better voices of his generation and 2022 has been his year.

The production is clear, tight and modern sounding, thankfully nothing close to the digital overperforming drum machine metal of today and the artwork/layout with the impressive 20 page booklet looks great and works well within the setting and concept of the band.

On the flipside, there are some minor annoyances. While the album sounds great and very easy on the ears, there are times that I found songwriting to be a bit safe and formulaic, there was no coloring outside the box and the repetition had me drifting away before getting sucked back in when a change in pace took place. The central point of all the songs are the choruses, but at times it felt like I was listening to a bunch of (very good) singles rather than a complete album from start to finish. Songs are great, but at times I felt like they lacked persuasion and gravitas.

Nitpicking aside, Master Of War is a great album, surely one of the best in the genre for this year and many of the songs included here have already been on a steady rotation in my playlists. And while the titular character wields a giant hammer, these guys have all the arrows in their quiver to eventually hit dead center and give us an album proportional to their undeniable talent.