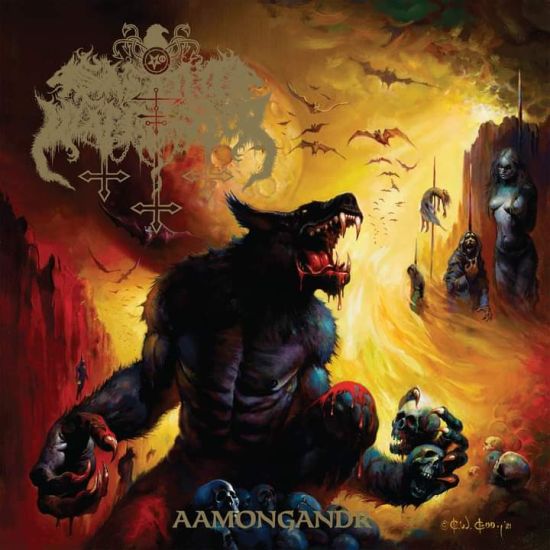 “Satanic Warmaster has sold hundreds of thousands of albums internationally.” Ahahahahaha. Frankly, I didn’t know that there is so much humor in black metal (promos). May I also tell some funny nonsense? Metallica will open the stage for the main act on Satanic Warmaster’s next world tour. Bad joke, you’re right. Perhaps I am well advised to put the focus on Aamongandr.

The first song bursts out of the speakers immediately, no warning, no intro, no warm-up period. My first impression was that this approach could result in a pretty one-dimensional output. Only full speed ahead with restlessly hammering drums is always at risk to be not enough. But the venomous gnome who runs Satanic Warmaster was obviously aware of this danger. Thus he has equipped 'Berserk Death' with both grumbling guitars at the very strong beginning and keyboards that take the lead as the song progresses. Don’t worry, this instrument is cleverly used. It creates a slightly spooky atmosphere without pouring sugar on the guitar lines. Moreover, its melody line gives the song a great flavor. Nevertheless, the guitars do not stand in the shadow of the keyboards. Due to the dense production, they form an impenetrable fog. But the permanently humming guitars do not swallow the drums and the vocals are also put in the right light. All in all, they build a solid wall of sound in the fast sections, but they leave an impact during the mid-tempo parts as well. 'Duke’s Ride' probably will show you what I mean – a good song, although its calm break and the following part (inspired by early and then still authentic Dimmu Borgir?) are slightly irritating. Considering the somewhat melancholic opening riff of the closer, Burzum is another influence of Satanic Warmaster.

Werwolf, the man behind the project, is not only a Finnish citizen. He is also involved in many other bands. It therefore goes without saying that he knows all essential ingredients for a black metal album. Okay, this does not prevent that some standard parts have crept in. Not boring ones, to be clear, but standard. Anyway, the dude is able to give his art some unexpected impulses from time to time. 'The Eye Of Satan', for example, is not only a wrathful orgy of high-velocity parts and less stormy sections with cleverly interspersed keyboards. To my surprise, an almost folkloric melody battles with the wall of metallic noise during the last 50 seconds of this track and gives the song an additional flavor. The nearly seven minutes of 'Darkness… Triumphator' do not know such gimmicks, but their headstrong stubbornness impresses me. This is not the first song (and it won’t be the last, hopefully) that sets the focus on rapid rhythms and infernal guitar lines, but it is excellently executed. Too bad that we cannot say the same about the promo text which seems to be done by a weekend poet with an affinity for never-ending sentences. But please spare me quoting further details from it.