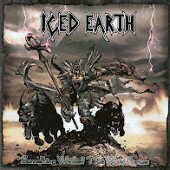 America’s underground metal heroes deliver again. "Something Wicked This Way Comes" (what a title!) turns out to be a satisfying metal record with the usual Iced Earth trademark of just missing "something" that makes it really great. That "something" sure is "wicked" all right, hahaha. "Burnt Offerings" had it but Iced Earth seem to have lost it since then, not a good sign, I have to say. I was expecting a lot more from Shaffer and the crew after the disappointing "The Dark Saga".

OK, so the first half, or 3 quarters actually, of the CD annoy me because I keep having to press ‘skip’ on my player to avoid the boring slow, "emotional" tracks: 2. "Melancholy", 4. "Watching Over Me", 6. "Consequences" (blech!!!) 8. "Reaping Stone" and 10. "Blessed Are You" come on, what bullshit! I thought I bought a metal record. Shaffer, you tried to write a few good ballads but turns out you suck at it so how about you never do this again and stick to your mighty shredding!

On the other hand, the odd number tracks are totally fast and heavy and just rip up the phony emotions of the slow songs with rage and fury I had no idea Iced Earth possessed. 3. "Disciples of the Lie", 5. "Stand Alone", and especially 7. "My Own Savior": pure ass kickage! The first track "Burning Times" is kind of a mix between the two song types and strangely ends up annoying me even more than the slow tracks.

Count the first 10 songs as a strange prelude to the album that seems to endlessly shift from good to bad and fast to slow to the three final songs that are the very -heart- of the album: the "Something Wicked" trilogy. Halfway through the first trilogy song, the whole album picks up and whirls you around like a mad hurricane for no less than 15 minutes! The Iced Earth boys rip, shred, scream, and pound through the songs based on Egyptian mythology with a weird twist by Jon Schaffer. The Anti-Christ brings the Apocalypse from the sands of Egypt and Iced Earth are the newscast. Simply fucking amazing music, the last three songs seem to make your $20 finally worth it.

Gotta give the artists credit for the totally cool cover as well.

Bottom Line: A totally ripping metal album with a seemingly boring 40 minute intro. Nothing happens until the very end, and what a fucking end it is!