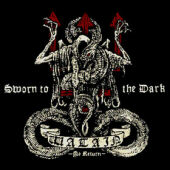 Type: Full-Length
Release Date: February 19th, 2007
Label: Season Of Mist
Genre: Black
1 Legions Of The Black Light
2 Satan's Hunger
3 Withershins
4 Storm Of The Antichrist
5 The Light That Burns The Sun
6 Sworn To The Dark
7 Underneath The Cenotaph
8 The Serpent's Chalice
9 Darkness And Death
10 Dead But Dreaming
11 Stellarvore

Whenever I think of The Wild Hunt, the hype that was (and perhaps still is) made around Watain annoys me. But of course, the Swedes' discography does not only consist of this lacklustre commercial tootling. In 2007, for example, the trio released Sworn To The Dark, a glorious album. Admittedly, this record already represented a departure from the unleashed orgies of the previous albums. Watain had shifted down two gears. But nevertheless, their third opus still sounds like unadulterated black metal. At this point, a particular band is often mentioned as a role model/comparison, and Watain cannot complain about that, since they themselves dedicated the first song on Sworn To The Dark to Jon Nödtveidt, this mentally disturbed criminal. However, I would like to remind you that even Dissection, for all their greatness and class, did not have a monopoly on melodic black metal from Sweden. I would just like to drop the name Unanimated in this context.

Dissection certainly generates the black metal atmosphere during the 57 minutes of Sworn To The Dark partly with different means than before. But there is nothing reprehensible about that, as long as the music has a diabolic note consistently. During every second, the album creates a scenario of dark horror. Yes, there are almost pleasing melodies on the full-length record. But underlying them at all times is a profound blackness. Moreover, they serve the dramaturgy of the album. Watain are not afraid of violent outbursts, as not only 'Stellavore' at the end of the album proves one last time. But they don't see an end in itself in this either and know that these phases of pithy brutality come into their own all the better as they are juxtaposed with a few calmer (but not friendly, happy or sugary) sections. At the same time, the production contributes considerably to the consistently satanic mood. Some may find the sound too professional, too smooth and too controlled. I can understand this position. But black metal, just like the real evil in the world, has many faces. Moreover, it is not wrong to offer different options to newcomers to the subject. Not everyone immediately falls in love with the genre if they are only presented with uncouth underground productions whose low fidelity appearance can grate on the nerves. In any case, Sworn To The Dark boasts a flawless sound, if you leave the underground dogmas of the genre police aside.

Getting back to the slightly modified style, 'Legions Of The Black Light' is certainly not the expected opener. The track represents the album, but not the previous career of the devil worshippers. Kept in a rather dragging tempo and carried by outstanding guitar work, it immediately introduces the band's new sound world. I think it's brave that the group didn't pro forma put an old-style piece at the beginning here to fool the buyers. Beyond that, the piece has a lot of class - but that basically applies to every track on the record without exception. 'Satan's Hunger' doesn't have to hide behind the first smash hit at all and also the massive 'Storm Of The Antichrist' with its very fast parts is convincing. All tracks are composed in a very varied way without hurting the homogeneity of the full-length. In addition, there is not one inappropriate break or inadequate song part appearing. Finally, there are the not perfect but strong vocals and a high degree of spirituality and individuality.

Beyond that, the piece has a lot of class - but that basically applies to every track on the record without exception. 'Satan's Hunger' doesn't have to hide behind the first smash hit at all and also the massive 'Storm Of The Antichrist' with its very fast parts is convincing. All tracks are composed in a very varied way, with not one inappropriate break or inadequate song part appearing. In addition, there are the not perfect but strong vocals and a high degree of spirituality and individuality. Therefore, I can't say it any other way, for me Sworn To The Dark belongs to the very good records of the black genre, even if no harshness records are set. Even more, after listening to this album (or Casus Luciferi, not to mention Lawless Darkness) with its late highlights like the vehement 'Darkness And Death' and the already mentioned 'Stellavore' (inter alia great choirs at the ritualistic beginning), I find the hype around the band no longer annoying, but quite understandable.