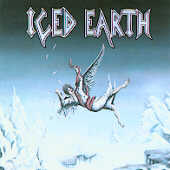 For as beloved and revered Iced Earth have been for always being one of the few bands one can rely on to bring take the torch from bands Judas Priest and Iron Maiden, the latter of which they were so inspired by to have even originally named their band after the song "Purgatory", Iced Earth have never been the most graceful band out there. I remember when these guys preened themselves online back in the old Myspace days, making themselves look as stupid as the other big American power metal band, Manowar. What is it with American power metal and labeling oneself as "true metal" while putting down everyone else? Well, they're confident, but are they any good? Nah, no Iced Earth pretty well suck both inside and out. Forget about the incompetent singer Gene Adam, these guys flat out sucked back in the day for lack of professionalism (which has proven to be an ongoing problem), poor production, and the inability to write a halfway decent song that didn't either make use of Iron Maiden style triplets to the point of redundancy or add in these pretentious slower, spoken word sections that aren't very musical and don't contribute anything other than to pad out the album's length. On second thought none of these problems would be exclusive to the band's debut, but for as inspired as they were by some of the most legendary acts there are, one would think that they might have incorporated a few more ideas from said bands for their debut album, and considering the band had been alive and well for a full five years before the release of their self-titled debut, I find it hard to give them any benefit of a doubt that maybe Iced Earth was just a rush job.

Instead of realizing how the entire band sucked on a holistic front, they blamed it on the mediocre singer, firing him and replacing him. They even went a step beyond and re-recorded this very album with Matt Barlow later on. I realize Gene Adam sounds like some kind of fictional, sub-human creature... a high-pitched Smeagol from Lord of the Rings comes to mind, but come on, he's not repulsively bad to the point that the original album becomes hard to listen to. No, the production quality is fully capable of doing that on its own. I know drummer Mike McGill has a ride cymbal, surely he has one, right... right? Okay, maybe I'm not so sure, but one thing I do know is those guitars leave a lot to be desired both in terms of tonality and the compositions themselves. Jon Schaffer has a triplet happy right hand. It doesn't matter if he's playing rhythm of leads, he will proceed to annoy me with his superfluous use of them and leave me wondering if he's recycling riffs or whether he's really just that two-dimensional as an artist. Tonally, this stuff is pretty dull and flat, with the snare having more reverb to it than anything else on the album. The worst case is on "Life and Death" which opens up with this ugly, tinny, shrill clean guitar that pierces your eardrums and sounds like it was made by someone who just started learning to play the instrument.

The wretched slow moments are by far the worst part of Iced Earth. During these sections our interesting as mud singer takes the liberty to rap to us all about how a slow section ought to be done, in the form of spoken word! Oh! Ah! Gene, what other tricks do you have up your sleeve, you wizard you? Gregorian chant? Mongolian throat singing? Not quite, although they'd most likely be equally as boring in their delivery, but we do get some rather odd vocal synthesizer effects on "Life and Death", probably because he couldn't come up with a vocal melody to make the chorus interesting and they decided to use this effect to mask the fact that he couldn't get a clue. This album opens up with two songs back to back that incorporate slow, spoken word sections and it really drains the life out of whatever the album might have going for it thereafter. Those who continue to trek the snowy wastelands will find very few redeeming qualities to the album beyond "Curse the Sky" as later songs such as the overly long "When the Night Falls" and "The Funeral" suffer from the exact same problems. A throwaway instrumental that leaves little to the imagination further lulls as it becomes clear that even when there's no vocalist whatsoever, the band are adamant on writing fluff, "The Funeral" isn't exactly an instrumental, but might as well be as the vocal duties are spread thin, meanwhile the song plays out as if it was supposed to have a vocalist. That is to say that it's repetitive and doesn't move around a whole lot to the point that it would've been difficult to sing to.

"When the Night Falls" has its moments, this one actually sounds like something that could've been inspired by Iron Maiden. There's actual melodies and motifs are played on. The triplet riffs are still overbearingly stupid, forced and auto-pilot by this point, but there's some nice intercessions that make it feel some thought was put into it. All in all, Iced Earth may be known for being a power metal band, but to my ears this sounds like wimpy 90's thrash metal that misses the mark entirely. I remember when Iced Earth were calling bands of the 90's and mid 00's posers, I have to say from what I've heard of the band, they were doing nothing but deflecting their own insecurities.