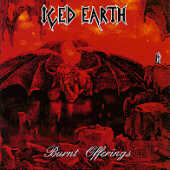 Yes you read correctly! This is by far the most interesting and uniquely uncharacteristic album Iced Earth have ever made. What a strange demonic transformation from the traditional Maiden-esque oldschool-metal debut and the "Stormrider" follow-up! Holy crap! This time instead of being stormed by fast guitars and cheesy singing we’re banished to a cold realm of infinite sadness and darkness. This is an album to get lost in and then secretly hope you never find your way out of; an album that demands absolute attention to every detail that, if given, will have you constantly reaching to your player to rewind and hear parts or entire songs over again.

Jon Schaffer has finally found the singer of his dreams! Matthew Barlow is genuinely talented but his undivided potential in the band would not truly shine until some time later on, instead this is an album that saw Jon push his mastery on the guitar and songwriting to its absolute peak. I mean just listen to those background melody lines on the 'Burnt Offerings' chorus or about one minute into 'Creator Failure'! Brilliant!! When has he last or since created something so beautiful! The Gut-wrenching and sorrowful melodies here are infinite, way too many to mention! The atmosphere is sad and cold and dark. I love it! No other Iced Earth album carries such a strong feeling and character. What an unexpected turn from their traditional style... they’ve taken me by total surprise!

Member-wise the band is still unsteady, the revolving-door lineup has become like a whole new aspect of Iced Earth that is now a large and unique part of who they are. As long as Schaffer’s on the prow with the controls firmly in hand there’s no worries. I love the lead guitar contributions by Randall Shawver, particularly on 'Creator Failure' and the famous, godly 16-minute epic 'Dante’s Inferno'. The solos bring such a fitting mood into the songs! Intricate acoustic guitar work is plentiful; the drums are tuned fairly low and sound like cracks in some dark dungeon, both factors strongly contributing to the overall character and atmosphere of the album.

Not only does "Burnt Offering" see Jon’s songwriting take an enormous leap into the heavens, the lyrical work is also better than ever. Very cryptic, poetic and sinister: "In the twilight of morning I rest my weary eyes, for the benefits of the night’s bounty were many, my soul has been redeemed..." - Diary; "Judge me not my shallow friend lest ye be judged yourself, you abuse the words you preach, you mold them for yourself, brainwashed hypocrisy justifies the life you lead..." - Brainwashed. As I’ve said before, he has not before or since put together words so fine and meaningful. The only Iced Earth album that I thoroughly enjoy and find great interest in. What is it about the third album being the climax for so many great bands? Metallica, Iron Maiden, Slayer, Bruce Dickinson, Amorphis...

Bottom Line: Dark atmosphere and sad melodies. This was the point in Iced Earth’s career when they combined all their talent and potential and truly gave it all they had! Brilliant!