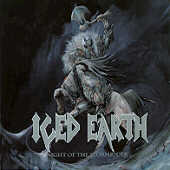 Johann Wolfgang Goethe's dramatic poem "Erlkönig" came to my mind as I bought Night of the Stormrider. In this masterpiece, the German genius (1749 - 1832) describes a wild ride of a father "through night and wind". He wants to protect his child, but as he arrives with the last ounce of strength at the safe court, the child is dead. An impressive and dark story, more intense than any kind of horror movie.

Well, I don't know whether Goethe inspired Iced Earth, but one thing is certain. Their second full-length also has a somber touch. The entire work is shrouded in darkness. Both the production and the musical content contribute to the nightly appearance. Already the dramatic, opera-like intro and song titles like "Angels Holocaust" do not promise an overdose of light entertainment. Despite the embarrassing artwork (did they lend this flying animal from Noisehunter?), the album is free from further shameful details. Iced Earth cruise along the highway between thrash metal, which is mainly expressed by the rasping guitars, and power metal that is reflected by the pretty melodic lead vocals (with great high-pitched screams from time to time) and a few calm sections, for example in "Desert Rain". By the way, "pretty melodic" describes the entire album appropriately. Iced Earth manage relatively strict and straightforward tunes such as the quasi-title track as well as partly ballad-oriented tracks. However, there is no doubt that the whole album can trust in its profound heaviness. Any form of schmaltz does not show up and as much as I regret it, that's not a matter of course when we talk about formations who locate themselves in the power metal spectrum.

Regardless of a few atmospheric keyboard sounds, the guitar work shapes the album and its fine line between belligerent riffs and more or less broad melody lines is remarkable. Iced Earth always stand with one foot on thrashing ground and with the other one in power metal regions, but they don't fall down. Admittedly, already Lawnmower Deth knew that "Weebles Wobble but They Don't Fall Down", but that's another story. The quintet from Tampa is working much more seriously and the clearly expressed sincerity is far away from jokes of any form. Especially the first three songs have a dramatic and somewhat desperate touch - Goethe would be proud of them. This applies all the more in view of the brilliant riffing, the elegant flow and the authentic approach. These songs embody the high class of Iced Earth back in 1991. However, the remaining tracks also have a lot to say and I am not listening to one of these dubious records that are getting more and more boring the longer they last. Even the closer with its soft piano ending adds value to this homogeneous and well produced album which holds very good or at least good songs without exception.

Night of the Stormrider is pure steel, released in difficult times. Thrash was more or less dead, the protagonists of the second wave of black metal still squeezed their pimples and Goethe's creativity was a thing of the past. Inter alia due to these circumstances, the album is highly recommendable and probably the best that the band has ever released.