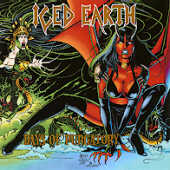 It was clear that the first two Iced Earth albums weren’t done the way Jon Schaffer would’ve wanted them. On the first one, the vocals were pathetic, and the second had horrible production. I still don’t know why they re-did the stuff from "Burnt Offerings" on the European double-CD version, though (which I don’t have, since I’m from good ol’ America and we don’t need bonus tracks and are rich enough to buy imports!).

"Burnt Offerings" is my single favorite Iced Earth album (that’s right) so don’t mess with the best. Re-doing those songs would make them sound lifeless and pretentious and the old album had so much feeling to it. There’s many a good tune here but just as many bad songs. Apparently they also re-did some really early demo days tracks that sucked then and won’t get any better with more expensive production and a bigger studio, though I think "Winter Nights" is one of these songs so I’m probably just talking shit. The early songs that really bother me are "Colors" (horrible, second rate Iron Maiden rip-off) and "Iced Earth", which sounds so amateurish. The long epics remain my favorites; "Desert Rain", "The Funeral" and especially "Travel In Stygian". Reworked, these songs sound truly magnificent and totally the way they were meant to be. "Pure Evil" is a totally ripping track as well.

Now Matt Barlow, the (relatively) new vocalist, is the main reason these songs were re-done. This guy is Dickinson compared to the first two Iced Earth frontmen and shows true vocal talent, the highs, lows, he does ‘em all perfectly, and also added his own lyrics to "Cast in Stone", the old "Written On The Walls" song. Jon’s shredding is tighter then ever and he simply won’t give it a rest, it even gets annoying at times.

This is the album that introduced me to Iced Earth and still remains one of my favorites, though there are too many bad songs that should never have made it on. Seems like they put some tracks here just so they’re there, and not necessarily because they’re good. They could’ve had a truly magnificent album had they shaved off about 5 songs.

Bottom Line: Imagine a slightly heavier and meaner Maiden. An absolute must for the Iced Earth fan who doesn’t own the first two albums. This is definitely better than the old versions.