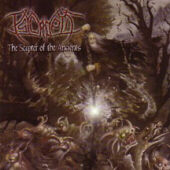 So, I sat on this for a few days and decided that I have no idea how else to start this review other than this; Psycroptic's second full length album The Scepter Of The Ancients is one of the best technical death metal records ever. Why? Just listen to it.

Ugh, fine. I guess I need to describe this album in all its glory to get my opinion out there. If you haven't heard of Psycroptic - partially good, partially not. Let's get the negative out of the way with this band; everything after this album sucks. I haven't listened to all of it, but I've listened to the first three that come after this and they were all really bad. Harsh, but don't feel bad, I'm just a feeble human being like the rest of you and my words should bear no power over your emotions. I write these merely to entertain myself rather than for other people's reading pleasure.

Psycroptic, for those who haven't heard of, play some of the nastiest, most technical and in your face riffs you'll ever hear. Their sound is not too far off from Spawn Of Possession, who (whom?) put out their debut this same year. Psycroptic features a little less flair and dissonance but is just as epic and perhaps heavier. Yes, yes, these RIFFS. Oh my God. These are some of the fuckin tightest and gnarliest riffs I've ever heard. They're fast, catchy as fuck, and they'll leave your neck sore after just one song. Psycroptic found a perfect balance between speed, precision and groove with these fuckers. Every song is jam packed with them, and they just keep hitting you with them over and over, changing minute details occasionally and using them to build into other riffs to create songs with a lot of emotion and raw energy. If you've heard newer tech death before this, chances are you'll be like "oh, so that's where 'x' band got their riff style from." The influence of this album leaks into countless tech death bands, regardless of style.

However, no solos - there's one solo on the album. At first, I was a bit confused. All this great playing and only one solo? Then I decided, eh. I don't really care that much. I love solos, but when everything else is this good, it is something I can look past, and with this album, I do. Another thing I have to look past is, wow, the bass player does nothing interesting all album long! Follow the guitars 99% of the time. That's the name of the game, and again, I don't care because of how good the riffs are.

The drumming? Catchy as fuck. Perhaps not as talked about as the guitar work, but the guitar player's brother behind the kit lays down some serious percussion skills. It's not the most jazzy or spastic but the dude sure knows how to add that extra punch into the riffs with some tight drumming.

So, that's it? Just some riffs? No solos or notable basswork and some pretty good drumming? Cool, but what makes this album so great? Well, this is where things get controversial. You see, there's one thing I just brush over in technical death metal a lot. Something this band, or this guy, rather, does very well that no band could ever dream of replicating…

When I first listened to this album, I was fairly new to death metal. Some may argue I still am, at only 3 years in the game, but that's besides the point. Upon this album first entering my ears, I could only think of one thing "Jesus Christ this guy sounds insane." Chalky has always been somewhat controversial for his vocals. Some people praise him for being one of, if not, the best death metal vocalist of all time, while some think he sounds horrible and ruins the album. If you couldn't tell, I fucking love his vocals. So much so, that I have the audacity to type out that this is the best vocal performance on a metal album, ever. Yes, even my favorites like Layne Staley and Chris Cornell couldn't hold a candle to this at the end of the day. He has amazing range, fantastic control, brilliant use of different vocal styles, and he's revolutionary in death metal. I know Lord Worm gets a lot of credit for changing death metal vocals, and he certainly is one of the best, but even he could only dream of sounding as fucking terrifying and manic as Chalky sounds on this album. How this guy was able to record this entire album without blowing his voice out is beyond me. He goes off in every single song. His vocals are all over the place, rarely taking a rest and he spits out so many words in one song. He constantly changes up the vocal style he's doing, whether it's a low, brutal death metal gurgle, a high-pitched black metal scream, or just straight up regurgitating noises like a person in the middle of being decapitated. He's every vocalist in the extreme metal world put into one. Dude even shrieks like a banshee in some songs and it honestly sends chills down my spine.

Even if you end up not being a fan of the vocals, it's hard to find albums quite as influential in technical death metal as The Scepter Of The Ancients. It was revolutionary at the time of it coming out and continues to be one of the genre's finest achievements, nearly 20(!) tears later. Unfortunately, Chalky either quit or was fired from the band after this release, and the music quickly nosedived. They somehow managed to go from the best death metal vocalist to someone who's not even a death metal vocalist and the riffs became boring and repetitive. Shame. At least, in their prime, they were able to give us one of my favorite albums ever. I could forgive all else because of this record. Must listen.

Favorite song: 'The Valley Of Winds Breath And Dragons Fire'