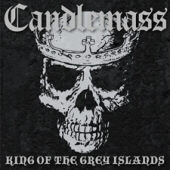 When it comes to doom metal, I am anything but an expert. I respect bands like Count Raven or Saint Vitus for their authentic, non-commercial way of proceeding, but their music does not release endorphins in me. Candlemass are different. Perhaps they are no real doom band and I can imagine and partly understand that some maniacs of the sub genre say that they sound lax and infidel. Just listen to the very melodic chorus of the velvet 'Of Stars and Smoke'. I don't care. The Scandinavians have published some truly great albums and King of the Grey Islands is one of these works.

Generally speaking, it is a pity that Messiah Marcolin was not involved in this work. Back in the old days, this well-nourished dude seemed to belong to the inventory of the group. But Robert Lowe does not lack charisma as well. As soon as his sonorous voice comes in, he spreads a majestic aura which fits a title like 'Emperor of the Void' very well. Speaking of this piece, it combines tragic, strictness, heaviness and desperation in a fascinating manner. The song opens the door to the cosmos of Candlemass where the guitars sound like rolling thunder. They pave the way for the very strong compositions that flow smoothly without lacking rough edges. The songs are always comprehensible, but not primitively configured. Main man Leif Edling has forged intensive numbers. Just like so many other Swedish musicians, this guy knows how to pull the listeners into the songs in a matter of seconds.

The material relies on a comparatively small number of riffs, but these riffs carry the songs safely to their destination. Tempo changes only occur if there is no alternative. In this context it must be mentioned that the drums do not withstand the power of the guitars. A little bit more pressure of the snare and the bass drum would have been nice, nevertheless, the mix does not deserve harsh criticism. It puts the emphasis on the massive guitars and that's absolutely okay. Moreover, it matches with the material which commutes between the pretty swift 'Emperor of the Void' and the dramatic 'Embracing the Styx'. These songs build, together with tracks like the direct and stoically stomping 'Demonia 6' or the very typical, slow-moving but somehow explosive 'Devil Seed', the highlights. Yet I must admit that all eight regular tracks of the normal edition have the potential to become your personal favourite.

All in all, this album conveys sadness, melancholy and broken dreams. From my point of view, it marks a highlight in the discography of Candlemass. The bonus section does not really add value to the album, but it also does not affect its class in a remarkable manner. Candlemass were in great form in the first years of the 21st century. Therefore, King of the Grey Islands is almost as good as its phenomenal predecessor and definitely worth listening to. That's not difficult for me to judge, even though I am no doom metal specialist.