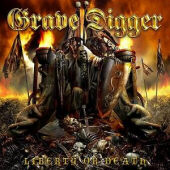 I stayed loyal to Grave Digger from their very early days until Ballads of a Hangman. Afterwards I was no longer able to feel any kind of enthusiasm. Grand masters of repetition like AC/DC or The Ramones are or were allowed to release the same album again and again. But this is Grave Digger. AC/DC had Bon Scott and Brian Johnson, Joey Ramone's voice ennobled many 120-seconds-tunes, but here we have to listen to Chris Boltendahl. "Bolle" sounds as always, a little bit like an angry frog in a dried-up well. He does not totally fail, but I wish he would sound much more natural. To be honest, I don't think that he has enough talent to play with the big guys of the business. Especially the melodic parts like the kitschy chorus of the third track reveal the deficiencies of his voice. He is not able to add a heavy touch to these parts, but he sounds like a singing preacher. The sticky background choirs do not make things better. So if you think that I do not like the third song very much, you are absolutely right.

Fortunately, this letdown is sandwiched by pretty strong numbers. The fast-paced "Ocean of Blood" has more drive than the majority of the remaining tracks, "The Terrible One" scores with appropriate pressure and insistent riffing. These numbers show that there is still a fire glowing in the band camp of Grave Digger. Nevertheless, these are no songs that force anyone to buy Liberty or Death. The same goes for "March of the Innocent", even though it marks the climax of the compositions. In terms of Grave Digger, we can speak of a multi-layered song, because it combines a melancholic frame with a robust yet flexible main part. Of course, don't await any form of technical frills, but the solid verse, the very good, atmospheric bridge and the relatively catchy chorus go hand in hand and create a resilient piece of traditional metal. Maybe the average solo is a little bit too long, but this does not damage the overall picture. And I may not forget to mention that the pretty powerful and technically clean production lends the song the adequate sound.

"Shadowland" with its machine gun riff at the beginning and some sharp guitar notes starts in a promising manner, but the song derails in the faceless chorus. This is no isolated case, light and shadow are very close to each other. Even "Massada", which presents one of the lamest and non-creative choruses of the band history, has some pretty decent moments. However, after all it's a fact that the album definitely lacks highlights. But this is Grave Digger as we know them. Instead of releasing a killer output, they are always too quick to be pleased with themselves. And, to mention a further constant of their outputs, the so-called bonus song, a wannabe-meaningful semi-ballad, joins the endless series of crappy extras. So, try to enjoy acceptable tracks like "Silent Revolution". Bolle has found a sack full of words which end on "-ution" and invites the audience to sing along. Yet I prefer to leave the event.