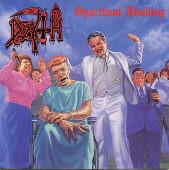 It wasn’t until Death’s "Spiritual Healing" that the band came into fruition. "Scream Bloody Gore" was heading the band in the right direction, but with simplistic riffing. By the time this album came around, Schuldiner was no stranger to guitar. The band started driving themselves into what ultimately would become a progressive and melodic metal.

While changes have been made in the Death line-up, particularly the replacing of guitarist Rick Rozz with guitarist James Murphy, this didn’t change the direction and ideals of Death greatly. This is probably because Chuck was the heart and soul of the band. His singing ability has improved quite a bit, seeing as to it that people can distinguish what he is actually saying. I’m particularly glad Rick Rozz is out of the band. He just wasn’t on the same level musically as the other members. Overall, the line-up is much tighter this way than before.

Bottom Line: For anyone who was interested in any Death, new or old, "Spiritual Healing" is worth your money, even if it isn’t as good as other releases. For those new to the genre, Death should be your first stop and this is a great place to start.

Rating: 8.6 out of 10, because of the bands notable progression later on.