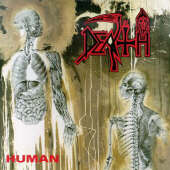 I was sitting the other day thinking about Chuck Schuldiner and these new Death reissues and wondering how cool Chuck would undoubtedly think it is that Death is so revered after all this time. When you hear about the Floridian death metal scene it starts and pretty much ends with Chuck and Death, and there really is no need to go into the history and lineage; if you’re reading this you know who the man was and who he will ever be, not to mention how important he is to all of heavy metal. Let’s talk about the Human reissue, yes? Human was considered by many to be Death’s finest release, and while I find no fault in any Death album there is much credence to this claim. Human followed the flawless Spiritual Healing that was near death metal perfection in the ‘dream team’ of Chuck and fellow shredder James Murphy, but the preceding release would prove that Death simply improved with every subsequent release.

Throughout the entire 35-minutes of Human there is no assuaging of emotions, no settling for second banana; Chuck Schuldiner and newly-added guitarist Paul Masvidal traded riffs like men possessed, seemingly rejuvenated and bent on creating a mass hypnosis within tracks like “Suicide Machine”, “Vacant Planets” and the Steve DiGiorgio bass-heavy “Lack of Comprehension”. What Human represents to the death metal movement is utter respect for detail and attention to quality, traits not too often found in the genre of late. It seems today the easy road is the “KVLT” necro sound which amounts to nothing more than laziness and expedited release dates due to internal concerns, budgetary or otherwise. When Death released an album you knew you were going to get a meticulousness not easily dismissed or fudged. One listen to “Cosmic Sea” and any questions are quickly dissolved in a furious onslaught of scales and pinpoint arrangements that set Death above the board in all facets. Lyrically Mr. Schuldiner set the bar somewhere between fantastical journey and deep inner introspection, providing a vehicle of total subservience to the vastness that is our individual psyche, forcing us to think outside our comfort zones. “See Through Dreams” is the catalyst with which we truly engage ourselves if the mind is so inclined; this piece of intellectual examination is the topical Gibraltar for me. Death is not for the timidity of toe-in-water testing; what you will find here is only to be ingested at full strength of mind and over-estimation of the self and its functionary design. This band is the thinker’s death metal through and through without reservation or equal.

When this album first hit the stores I was amazed driving home from the store at how terrific the production was (remember, this was 1991, people) and how fluid the overall sound was. I remember bringing it over to my band practice and playing it for my friends, who worshipped at the Testament altar, and it just seemed lost on them. That should have been a hint right off, but, alas, this helped prove my theory that Death, while wholly illuminating, can also be wildly intimidating to any musician. Therein lay the beauty of Human; the album castrates the expectations of many and inspires and cultivates even more. Suffice it to say, I didn’t bring any band members to see Death live when I saw these blistering tracks performed live twice on the Human tour. What an amazing spectacle they all missed…

Now that I’ve gushed accordingly over all things Human, I’ll get to the Relapse bonus material. As we’ve come to expect with the Sound of Perseverance and Individual Thought Patterns reissues, the bonus disc(s) are chock full of demo material from the respective albums, which is wonderful for musicians and general fans. As a bootleg trader for many years we would have killed for Death rehearsals and demos aside from the early issued releases. That said it does leave room for inquiry as to why Relapse doesn’t include some video footage, possibly a DVD of some concert clips or interviews conducive to the release. I personally know there’s a lot of terrific footage out there from each tour that could easily be cleaned, mastered and heartily gobbled up by ardent, rabid fans like myself. Granted, I understand the legal maneuvering of such additions and I’m delirious with anything Death-related that has yet to be unearthed, but possible inclusion of a DVD for the mail order-only third disc numbered version would be a sweet addition if agreements can be made with fan-footage holders or fellow band members. With this being my only umbrage to take up, I do recommend the mail-order issues for additional demo tracks simply because they are a truly unique gift for long time fans to hear the basic foundations being laid for what would become iconic tracks that serve as respectful testaments for a young man taken far too early and leaves us wondering what might have been.

Pregnant with informative liner notes and photos, these Relapse reboots are tremendously valuable for the underground that keeps the Death name going strong, as well it should. If anyone can listen to Death and not find perfection and historical significance throughout I strongly suggest he or she venture out to the local mall and seek out the nu-metal section for the new Decapitated, which assuredly reassembles the tag without benefit of explanation to the uninformed among us.

Death is the real deal and will forever remain as such. These reissues are an absolute must.