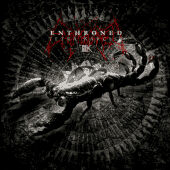 Sooner or later, all things come to a more or less natural end. Only the scourge of humanity, also known as Sabaton, releases shitty music endlessly, but that's not the issue here. I am speaking of Lord Sabathan - don't be fooled by the similar names, there exists a gargantuan difference between Sabaton and Sabathan - who left Enthroned before the recordings for Tetra Karcist began. Without any member of the original line-up, the remaining musicians decided to go on under the well-known banner. Slightly questionable, nevertheless, a good idea, because Tetra Karcist shows that there was still a solid black metal fundament. An institution like Enthroned does not stand or fall with the involvement of a single person, even it has been an important one for the evolution of the band.

The new lead vocalist, Nornagest is his pseudonym, is a worthy successor of the Lord. His throaty, hoarse and robust performance does not modify the sound of the Belgian squadron in a remarkable manner. The musical approach also remains more or less the same. Devastating black metal is on the agenda, sometimes a little bit mechanical, but mostly boasting with sinister emotions. The relentlessly hammering drums that shape the fastest parts of the album leave not much room for great feelings, but the slower sections take the listener into a dark cosmos of morbid grandeur. This is not to say that the mid-paced tunes are always better than the cruel eruptions of velocity. But the first track that keeps sticking in my mind is, despite some blast beats-like drum figures, a rather slow, almost bombastic yet very evil piece. "Vermin" has a lot of different facets and some of its sequences appear as a (very strong and expressive) leftover of "Seven Plagues, Seven Wraths", the epic anthem from "Xes Haereticum". Especially its second half shines with an unholy atmosphere and a very sharp-edged guitars dances upon dark layers of metallic heaviness.

The music of Enthroned reflects a certain depth, a specific spirituality. Call it philosophy, ideology or Satanism, it does not matter. What really counts is that nearly each and every album of this band is convincing. Black metal is not just their hobby, there seems to be a strong inner relationship between the musicians and their art. They are even able to infiltrate other people with their weltanschauung. Sorry, but I love to integrate a German word from time to time - and this applies all the more in view of the fact that the album was recorded by Harris Johns, the old German legend who was already responsible for great Teutonic thrash outputs during the golden eighties. But now he seems to be infected with the black virus of Enthroned, because Tetra Karcist marks already the third full-length with a contribution from his side. Anyhow, the here reviewed work does not score with an outstanding mix, but its dense, powerful and vicious sound also gives definitely no reason to moan. Only "The Burning Dawn" surprises with a crude, dull sound effect. However, the sonic carnage does not suffer from a feeble technical execution, that's for sure.

Admittedly, I do not find songs that push the record from good to absolutely brilliant. Furthermore, I can understand that some people might say the album delivers just more of the same. But Enthroned have found their place, their supporters love them for what they are doing and therefore I see no reason for them to" "take the next step" (which mostly leads directly into the abyss). And the songs are good, no more, no less. "Psalm II: I Reign Over You" bundles the strengths of the band for the last time while attacking with thundering drums, mean guitar leads and frightening vocals. This is black metal. Maybe the jesters of Sabaton are able to piss in various colours (I do not intend to check it) and from this point of view, they are more competent than any worshipper of pure blackness. But they fail to write good songs. By contrast, Lord Sabathan has released a couple of breathtaking pieces with his new black metal combat unit called Slaughter Messiah. Well, as mentioned earlier, please notice the gargantuan difference. And don't forget to lend an ear to Tetra Karcist.