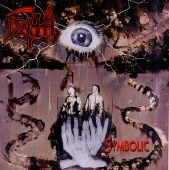 I've recently heard of Symbolic be described as one of the most important thrash metal albums in existence, a perplexing and fascinating perspective on a band whose definitive genre is given away by their namesake. Indeed, Death are perhaps the very reason people started distinguishing a division between the fast bands that had guttural vocals versus those that did not. Vocals alone would only tell half the story though with traditional death metal bands also having a few other traits linking them in the synapses of peoples' minds including crazed guitar solos that may outright wave a middle finger to music theory and allow the musician to replace the conventional standards with something not even rooted within theory, drums often encompassing little to no resonance and a raw sound that would keep the spirit of heavy metal alive in the underground throughout the 90's. Symbolic really encompasses none of those traditional death metal traits, and I would be hesitant to call Symbolic a death metal album in those regards, but my first instinct would also to be hesitant to put this on a top ten albums important to the thrash metal sub-genre list among staples such as "Kill 'em All", "Bonded by Blood" and "Reign in Blood".

Yes, I'm looking at you WatchMojo. Props for throwing in a curve ball, it's true that Death have become more of a thrash band as the 90's went on, and perhaps it would be appropriate to say they made this shift in genre on this very album's predecessor, Individual Thought Patterns with Chuck Schuldiner's vocals incorporating a new sandpaper grit to them as opposed to the infernal roars heard on earlier albums. One of the most influential thrash metal albums of all time though? That's really a harder sell. I don't completely disagree with it, but in my experience, very few people even acknowledge Death when they discuss thrash metal. That's probably because of the stigma that Death is a death metal band. After all, their name is Death, so what else would they be? Surely they can't evolve like any other band, right? No other band has been more boxed-in to their roots than this very band. On the other hand, Symbolic keeps thrash metal vibrant and fresh in the 90's at a time when thrash was no longer the flavor of the week while actually innovating on the genre and giving us all a sense that the thrash metal well hadn't completely run dry by 1989. Well, one could say much the same for an album such as "Twisted into Form" by Forbidden, released five years before this at the turn of the decade.

That's what I would say, but truth be told, "Twisted into Form" didn't quite have a "Crystal Mountain", a song to transcend the album itself and become one of the more recognizable takes from a sub-genre. Speaking of such, it's the perfect song to segue into discussing how progressive Death have become at this point in their discography. Taking a look at the track list and seeing a couple of six-minute songs and a whopping eight-minute album closer may be suggestive enough but track lengths don't necessarily equate to musicians writing more sophisticated or intelligent music, as indicative as they may be. "Crystal Mountain" takes us through layers of songwriting and gets across a lot of different cohesive ideas in a relatively short amount of time, and the song manages to throw itself in quite a few different directions without becoming jarring to listen to and returns back to these sections multiple times so that they become familiar to the listener over the course of the track's length. That seems to be the primary difference between this album and the much more sporadic follow-up, The Sound of Perseverance. Finally, the track ends with a flamenco solo on an acoustic guitar over the thrash metal passages still setting the rhythm. It's a really good example of what Symbolic brings to the table.

Because of that, some would say that Symbolic is like it’s incredibly progressive successor The Sound of Perseverance, but a more focused and fine-tuned album with more of a handle on keeping the music contained and controlled, a daunting task for a band that never had a consistent lineup to build rapport with, though drummer Gene Hoglan thankfully returns for his second album with the band. His drumming is as formidable as ever, almost constantly going at a million miles an hour even when it doesn't seem like he needs to such as during the first half of the solo of the opening title track. A solo which finds itself amid a tempo change and upon speeding up transitions from dark and emotive to chaotic and chromatic. Sometimes Hoglan and crew do actually slow things down and in these moments we get a glimpse at how dynamic Death can get on their '95 release. The slower parts of "Zero Tolerance" for instance has a slower section with a short guitar solo that is allowed to just ring out and breathe, and one can tell from listening to such sections that Schuldiner was challenging himself as a guitarist to find sequences that create tension, suspension and dissonance. I don't necessarily find the guitar work on here to be all that memorable, but it's definitely unique and against the grain.

From the onset, the crew at WatchMojo may seem like they're making a bold claim by stating Symbolic is one of the most influential thrash metal albums of all time, but if we had to choose just one album from the 90's to be a representation of a new direction for thrash metal in the way we see it now with releases such as Vektor's "Terminal Redux", then of course, this album is nearly perfect by my estimation because we have to keep in mind that some people actually think Machine Head's "Burn My Eyes" was the next evolution of thrash metal. It is a shame too, to find that this was the most recent album on their list, I'd say enough time has gone by for anything released in the 2000's to take precedent over something as debatable as "Among the Living" by Anthrax. Death's penultimate album is a great album for those looking for something more outside the box, musicians who've grown bored with the tirelessly utilized clichés in thrash will especially love it because of its diverse and experimental approach which makes it an easy album to get lost in.