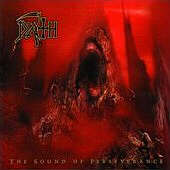 Type: Full-Length
Release Date: August 31st, 1998
Label: Nuclear Blast
Genre: Death
1 Scavenger Of Human Sorrow
2 Bite The Pain
3 Spirit Crusher
4 Story To Tell
5 Flesh And The Power It Holds
6 Voice Of The Soul
7 To Forgive Is To Suffer
8 A Moment Of Clarity
9 Painkiller
MetalBite on YouTube

Originally formed as Mantas in 1983, the late musical legend Chuck Schuldiner decided to change the band's name to Death back in 1984. Their older material was considered to be straight forward death metal. This would include Scream Bloody Gore, Leprosy, Spiritual Healing and Human (1987, 1988, 1990 and 1991 respectively). Their later releases shy away from this death metal only approach and would be considered to fall under genres of death/progressive metal. That seemed to be the aim for this final Death album. Chuck's progression in his songwriting really steered in the direction of this more melodic sounding song types, and a lesser focus on death metal only, as was previously mentioned.

The music on this album showed another very skilled and creative form of metal song writings. This displayed how Chuck focused more on melodic/technical guitar parts and was opposed to being simply tied down to one particular genre. The guitar riffs on here reflect the mastermind's ideas put forth into action. This release is probably Death's most technical one; I'd say more so than any of their previous albums. The tracks such as "Scavenger of Human Sorrow", "Bite the Pain", "Spirit Crusher" and "Flesh and the Power It Holds" are extravagantly written songs. The reason I say this is because they seemed to be more reflective on melodic riffs and high screeching vocals, instead of the past heavier riff writing styles alongside a hoarse or guttural throat. Everything on here featured Chuck at his best in terms of songwriting capabilities; each track has its key moments, especially on the instrumental entitled "Voice of the Soul."

The song tempos are moderately fast and explosive, with the exception of a few tracks. The metal just flows on this album, and each track demonstrates guitar parts that are totally original sounding and awe inspiring. There aren't any tracks on here that are boring or repetitive. The songs are so well thought out, and it's an amazing album to listen to. Analyzing each song, it's clear that every one of them are so original in their entirety. Some pieces seem to shine more so than others when it comes to their unique qualities, but overall the embellishments are remarkable. It's true that Chuck didn't like categories of metal; this was featured on a past interview via www.emptywords.org. But anyhow, his musical abilities really shined the most on this Death album; Chuck took metal to a new exploration here. For the most part, the songs are less brutal but still very catchy.

The sound quality was brilliantly mixed with each instrument well heard throughout the album. This was arguably one of the best produced Death releases ever thanks to Jim Morris. On a few different notes, I must say that the overall playing of each member was awesome. For example, Shannon Hamm, their last rhythm/lead guitarist was a little more technical than Chuck on his leads. He had a unique picking style, which was featured on Death's live DVD. Overall, this is one of the best lineups Chuck arranged to be featured here on this album. At the time, these musicians were hardly even known. Chuck was always notorious for selecting a different lineup on pretty much all of Death's releases. Each of the musicians on here are very talented, and Chuck did another good job of selecting the right people to perform on here.

Death's lyrical concepts focused more on topics such as spirituality and society, as opposed to mainly just gore. They are the most thought out than previous releases and reflect these newer focal points. However, on most Death albums, Chuck's lyrics are very well done, especially on Individual Thought Patterns (1993). This final Death album is again arguably the best Death release, lyrically speaking. The focus was more spiritually driven, with less of an emphasis on other previous topics. A good example of this concept was on the track entitled "Spirit Crusher." In addition, this album features a cover for Judas Priest's "Painkiller" on the last track, which was because of Nuclear Blast's re-released version back in 2001. A really good cover to say the least.

In conclusion, The Sound of Perseverance is Death's most technical and one of the most brilliant releases out of their entire discography. There aren't any tracks on here that don't show Chuck's brilliance in songwriting in terms of musical and lyrical capabilities. Chuck was metal's Mozart for sure, and death metal was pretty much founded by the band, at least during their earliest days. Don't miss out on this release, because it demonstrates so much diversity and originality. Chuck will be missed, but his legacy lives on through his music, in which he was able to put forth while he was living.

And then there was a day when Death came to an untimely end. Of course, Death will always live on through fans of the music and be remembered as leaders of a scene. Nonetheless, "The Sound of Perseverance" is an excellent closing of a career for a band that has accomplished so much.

Once again, another line-up change has occurred. The amazing Gene Hoglan has been replaced by the worthy Richard Christy. Christy is an interesting listen. He has a nice style that compliments the music. Also being sadly replaced is bassist Steve Digiorgio. I’m glad that replacement Scott Clendenin proves to make good and interesting use of his instrument at times.

"The Sound of Perseverance" is Death at their peak of their musical vision. This has the best musicianship ever shown of Chuck, who has been the only member to stay since the beginning. It’s not really possible to see the growth of the other musicians through this band, unfortunately. The album is altogether the most progressive of anything the band has ever written, which seems to be a style of death metal that the band had been working towards since the beginning. It’s melodic like all other Death albums, but manages to keep a raw sound. It’s not melodic like the overcrowded Gothenburg scene. It’s great to see that the songs can have so many different parts in them, yet come together as one and not just a jumble of riffs. The songs are different, they do speak for themselves, and there are so many amazing and stand out parts here that it proves to be an album that can be heard over and over.

It’s a strong album from start to finish. Death has always been put out quality albums while keeping their original musical vision, but not becoming a parody of themselves. They’ve grown over the years from album to album, and that has definitely been a good thing.

Bottom Line: A great ending for a great band. Deserves a listen by all fans of progressive metal.

Yet how can I call them thrash when this band (along with Possessed) invented death metal itself?! It’s interesting how heavy metal standards have changed over time as bands like Nile or Immolation took the genre to the realms of absolute extremity, and pulled the name of death metal down into that murky pit right alongside themselves. Tragically the entire scene would soon get caught in a stale, unoriginal dead-end loop of blast-beats and guttural growls with almost no innovation, just a shallow race of who can go heavier and faster.

The "Sound of Perseverance", it seems, is not extreme enough to be branded the namesake of the band, but enough of this bullshit about extremities and labels, the music on this CD simply fucking rips! Chuck Schuldiner absolutely burns the strings with his eerie melodies and ear-splitting solos, while in the back the low tuned monster keeps the rhythm and jumps for the throat with it’s brutal riffs as soon as the lead guitar stops. Richard Christy sure as hell knows how to pound that drum set and can easily take on any extreme metal skinsman. He can deliver brutal and crushing beats, pushing the double-bass kicks as fast as he can, while still playing intricate and complicated pieces with the hi-hat and ride bell, as well as an eerie, seemingly low-tuned Chinese cymbal! It’s the coolest-sounding thing I’ve heard on a drum set in a long time!

The songs have strange and complicated structures and I love it! You never see what’s coming next, and awesome riffs lurk at every corner. The solo, and riff right after 'Bite the Pain' is simply unbelievable! This is what Heavy Metal means to me, that solo and riff, cranked to the max, is my best definition! And 'Voice of the Soul' is simply the godly display of Chuck’s raw talent on the guitar. But, unfortunately, some songs become a little stale and boring and Chuck’s voice pisses me off, but doesn’t take long before the good stuff comes roaring back and his half-clean voice becomes tolerable.

I don’t even have to tell you how magnificent the production done here is, the names Jim Morris and Chuck Schuldiner should speak for themselves. One knows what he’s doing, and the other knows exactly how he wants his album to turn out. The result is amazing, one of the best album productions I’ve ever heard.

I love the album title! The "Sound" is dark, powerful, complicated thrash-death metal and it’s tragic what happened to Chuck after this because his "Perseverance" with Death, his originality and experience in the genre would mean so much to the metal world. This is a band unlike any other.

Bottom Line: I always like to hear the word "perseverance" with a good band. Excellent album!