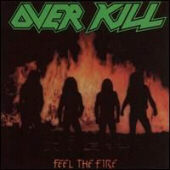 In my humble opinion, Overkill belong to these bands that missed the right moment to call it a day. Once a real pioneer with very exciting albums, they have become old and predictable with an annoying affinity for pretty long songs which do not come to the point. However, their contribution to the evolution of vigorous metal cannot be denied. So here comes my view on their best albums and one thing is for sure: Feel the Fire, ornamented with this simple and iconic artwork, has its rightful in the temple of the best debuts of all times.

"Energy" is the first term that comes to my mind whenever I listen to this output. Explosive velocity-eruptions like "Blood and Iron" or "Hammerhead" still fascinate me due to their spontaneity, their vitality and their straightforwardness. They are pumping adrenaline into my veins and I still feel like it's 1985. Too bad that it isn't. But don't jump to conclusions, because Overkill did not intend to set a new speed record. Many tracks are based on a mid-paced approach and this fact made me realize that this debut could not be considered as a typical thrash album. But honestly speaking, I do not really know how to describe its style exactly. Maybe the title of their demo delivers the perfect description: "Power in Black". This does not mean that they played power metal and they also did not celebrate a black metal mass. Needless to explain that they also did not deliver the delayed soundtrack for the political black power movement. But Feel the Fire is definitely very powerful and it has a dark, gloomy underlying sentiment. Overkill were aware of their individual approach or they just had a good instinct for marketing strategies, because they gave their style its own name: "blood metal". Either way, do not expect accurate and very sharp riffs or an orgy of high-speed songs, but an autonomous, robust and resilient record.

Feel the Fire has many good tracks. Nevertheless, there is one song that stands out. It constitutes one of the very few pieces like "Exodus", "Hell Awaits" or "Fallen Angel" that taught me a very important finding: it does not make sense to listen to any other music than metal. Of course, I am speaking of "Rotten to the Core". It possesses the catchiest riff of the entire rock/metal history, with the possible exception of "Smoke on the Water". That's not all, Blitz's sardonic laughter at the beginning, the well audible bass line, the excellent chorus and the slightly insane ending ("now rot rot, rot rot rot...") shape a larger than life song. I am sure that empirical research could confirm that people who do not like this track also do not like good sex. This track, number two of the running order, is almost too good, because it causes a collateral damage. In direct neigbourhood to this celestial piece of art, the comparatively pale opener has no chance to leave an effect. Fortunately, it remains the only track that does not fully convince, if I leave the bonus of the Noise vinyl edition out of consideration (a solid, but unspectacular cover). So, from my point of view, it appears as an ironic twist of fate that they chose exactly this tune in order to introduce the album.

Thank God, the pretty occult title track meets all expectations. It delivers the prototype of a galloping guitar and bass lines while scoring with dramatic sequences at the same time. Sometimes I wake up in the dead of the night and I am sure that Blitz has whispered "Higher higher feel the fire, she burns at the stake like a witch", but I guess I just like this moment of the song with the rasping guitars in the background very much. No doubt, "Feel the Fire" (the song) is nearly as good as "Rotten to the Core" and not only due to my lack of fantasy, I do not know a bigger compliment. Finally, the further songs have this subliminally dark element which enobles the entire album. Thanks to this somehow unholy component, a song like "Kill at Command" grows steadily with every new round until it reveals its full glory. It spreads some desperate vibes that fit into the context of this output very well and its intensity increases constantly.

Carl Canedy produced the album and compared with some of his further productions, Feel the Fire has a good, no, an almost excellent sound. It cannot be mentioned in one breath with Possessed's disaster called "Beyond the Gates" or Helstar's powerless "Burning Star". Yet in objective terms, Canedy is probably the worst producer of his time and Overkill's debut does not score with an outstanding sound. Anyway, everybody has got used to this mix during the last 33 years and it does not hurt the overall impression significantly. Consequently, the malicious band anthem, which scores with an impulsive chorus, brings a really great debut to its end. The reputation of the quartet had already been very positive before the dudes released their first official product and now everybody knew that nobody had promised too much. Feel the Fire catapulted Overkill directly at the top of the more or less extreme metal movement of the mid-eighties.