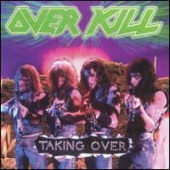 I have read a pretty funny comment on YouTube to this album. "Thrash rule No. 1 = shitty artwork, awesome music". Guess this hits the nail on the head. Especially the younger generations of thrashers seem to follow this questionable leitmotif. Taking Over also suffers from an ugly artwork (not the motif, but the colors!), but more relevant is another fact. The album proves evidence that the gang from New York did not lack ideas at the beginning of its career. Just like the real big players Metallica and Slayer, the four-piece was able to release more than just one classic. Their second work delivers purer thrash than its predecessor, but it does not achieve the same level of somberness. Especially "In Union We Stand" fails to create a dark mood. Its intention was rather to offer Overkill's version of Priest's "United" and further comparable, overly simple tracks with opportunistic lyrics. Overkill's peccadillo sounds less embarrassing than Priest's commercial kowtow, nevertheless, I actually see no reason why they recorded this number. Don't piss into Halford's stinky toilet as long as you have your own properly polished sanitary facilities.

Apart from this comparatively uninspired and predictable flop, Bobby Gustafson and his companions stay on the right track. They do not hesitate to shell the audience with pretty vehement thrash attacks and nearly all of them hit its intended target. "Electro-Violence", my personal favourite in view of its thunderous riffs, jagged bridge and exciting solo outbursts, washes away the sticky leftovers of "In Union We Stand", "Deny the Cross" marks a furious opener and "Wrecking Crew" with its rousing guitars is cut from the same cloth. These numbers do not deform the guidelines of thrash, they have great choruses, brilliant riffs and the young Blitz shines with charisma and expressiveness. All these tracks deserve 9 out of 10 points on the "Rotten to the Core" scale (and it goes without saying that 10 points is exclusively reserved for "Rotten..." itself!). No doubt, Overkill's creativity resulted in fantastic songs at the beginning of their career, inter alia due to the fact that any kind of groovy elements did not show up at this time. Happy childhood! Just bang your head and give all you can give, but don't intend to jump around like an idiot. These highlights deserve another form of attention.

Speaking of highlights, I have to mention the closers of both sides of vinyl. The second part of "Overkill" as well as "Fatal if Swallowed" show the entire gorgeousness of the quartet at the beginning of its career. The latter has a similar configuration like the other here presented speed songs, while the continuation of the band anthem lives up to its subtitle; "The Nightmare Continues" describes the terrifying atmosphere of this track fittingly. Just enjoy its fantastic introduction with the slowly but steadily growing feeling of discomfort and the assaulting drum rolls. All these highlights distinguish themselves from two less strong number of the A side, which prefer plodding mid-tempo. Anyway, six killers ("Powersurge" opens the B side vigorously and with well-integrated background vocals) pull the more or less adequately produced album on a very remarkable level. Needless to say, that Carl Canedy, the man who had given the debut a pretty miserable sound, was not allowed to enter the studio again. The production of Taking Over still does not offer the technical precision of works such as "Bonded by Blood", but its robust and somewhat swashbuckling mix spreads its aroma. So, what does this mean at the end? Taking Over was a worthy successor of the impressive debut, even though it did not fully achieve its excellence. Anyway, this album has withstood the test of time with great ease. Shitty artwork, awesome music? Well, most representatives of the young thrash generation were able to deliver shitty, multi-colored artworks, but only a small number of them (Warfield, Terrifier, Deathfist) have offered equally awesome music. Aggravating this situation, Overkill's enormous repertoire of exciting compositions seems to be out of reach for those guys. Well, time will tell.