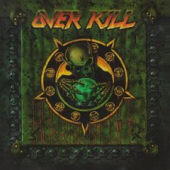 Heavyweight, deadly riffs drag the listener down. The few ones who can withstand these riffs are taken by extremely hefty, doomy guitars which create an enormous vortex in order to get him or her deep under the surface of toxic waters. Welcome to "Horrorscope", the track. Overkill, now a five-piece with two debutants in the guitars, check out the limits in terms of doom. The melody grinds slowly and mercilessly, it's a real feast to become witness to this steamroller, even for stubborn speed lovers like me. "Horrorscope", that much is certain, marks a worthy title track, albeit it does not show a representative approach.

The 6th album of New York's most persistent music formation offers an appropriately wide spectrum. Pretty fast thrashers stand shoulder to shoulder with melancholic feelings and cynical or desperate sections. But the main ingredient is the solid mixture of power and thrash metal which forms especially the tracks of the first half. The more or less experimental side of the band comes through during the second part, albeit the dudes do not develop completely new territories. Positively expressed, the guys avoid any kind of song that could damage their integrity.

"Coma" opens the album with a stage-setting acoustic intro - "Bare Bones" also shines with a spooky opening sequence - and its thrusting guitars ensure a good drive of this eerie mid-paced monument. The song conveys this uncomfortable feeling that separates real metal from radio-friendly rock music. Not to mention the great, intensive ending of this track. The following songs commute between up-tempo and mid-paced parts, they don't lack substance, the new guitarists show their skills and perform strong riffs, leads and solos. In addition, a proper number of breaks does not hurt the flow of the easily comprehensible tracks. In particular the faster sections make clear that the band still does not lack energy and the partly lame The Years of Decay falls more and more in oblivion as I listen to the here presented material. Overkill have never been the most technical formation, but the sharpness of tracks like "Blood Money" illustrate that they are able to score with pretty sharp riffs and an appropriate degree of accuracy. Either way, the first handful of songs always appears to me as a very homogeneous unit with "Coma" being the first among equals.

As already mentioned, the title track gives the album a new direction. This unstoppably rotating millstone sets the stage for another rather mid-paced beast. The stomping "New Machine" has this apocalyptic, oppressive mood that reflects the dictatorial regime which is described in the lyrics. This would be a good soundtrack for a remake of "1984" or "Brave New World" - or you use this music to accompany the pictures of your last holiday in North Korea on YouTube. Kin Jong Un will love you and the slightly industrialized last part of the song. To be honest, I am not quite sure whether he will enjoy this track, but due to whatever reason, I want to have at least one thing in common with this special type of terrorist.

Too bad that two of the last four tracks do not keep the exciting level of songs like "New Machine". Especially the instrumental cover version should be banned. It hurts the flow of the full-length and remains a foreign body. But shit happens, and it is of greater relevance that the properly produced album also scores with two highlights on the last meters. The speedy "Live Young, Die Free" and the thematically connected "Nice Day for a Funeral" with its riffs of steel complement each other ideally. No doubt, the band scores with a good teamwork. Led by Blitz, whose voice reinforces the mood of every track, the instrumentalists, play their parts flawlessly and present themselves as a well aligned combat unit. In view of all these factors, Horrorscope has never had the chance to gather dust on my shelf. And "Horrorscope" (the track) has more to offer than the whole repertoire of some lame doom bands, for example ______ (please make your choice).