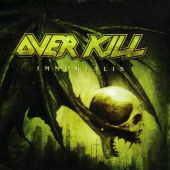 Thrash Metal is one of my favourite styles in metal. With growing up around some of the originators of the style, I have to say that this is my favourite style when it all comes down to it. For me, Overkill represent this style to the tenth power, and perhaps are one of the selected few that can boast being the epitome of Thrash.

The New Jersey metal sons are one of the most revered bands, but lacked the exposer of the likes of Anthrax and Metallica. They're still known for their stage presence and straight to the balls style of music. They were, and still are the thrasher kings. This 2007 release just confirms their royal status.

Songs like the brain-melting 'Skull And Bones' and the sonic pulverizing power of 'Hell Is' are just two of the ten tracks that leaves you breathless. Horns held high in the air while your head bangs along at a brake neck pace and your only listening to it on a CD. They just have the ability to thrash better than anyone before or since. They may seem cliched and outdated at times but we have to remember they are one of the originators of the whole Thrash scene.

Good music breeds great fun and Overkill is sort of like a metallic vacation on disk. To hell with Mickey and the Magic Kingdom down there in Florida, I want to go to Gutterland. Mickey or even Goofy would never survive the mosh pit.... but Minnie would be a new groupie for the band.

It has been a while since I’ve heard any Overkill’s recordings, so when I got their new album into my hands, I was really psyched, but also somehow uneasy. I didn’t know what to expect, since the last time that I listened to the band was in the era of “Under the Influence” or “Years of Decay.” I’ve listened to those two hundreds of times, so my expectations for “Immortalis” were rather high. Overkill didn’t disappoint.

They have put out “Feel the Fire” more than twenty years ago, but it doesn’t seem like they’re planning to slow down any time soon. New album is maybe a little groovier instead of full ahead thrash, but it just explodes with energy that cannot be harnessed. Track after track, they crush and shred with tons of exceptional riffing, great solos, double bass drums that keep the tempo to bang your head to, bass supporting the aggression and intensity, and last, but not least, the amazing and charismatic as ever vocals by Bobby Blitz. I am really impressed with what seems to be a possessed combination of great songwriting, more than a few musical concepts, lots of experience and authenticity, and let’s not forget THE ATTITUDE of course.

“Immortalis” took me back in time about two decades, and it felt so good to be able to thrash with the boys again. At the end, it looks like circle of life is in full spin, because once more I find myself listening to Overkill again and again, just like back in the day.