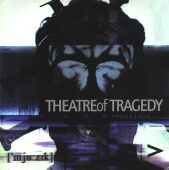 I believe what happened was Theatre of Tragedy started doing lots of psychotropic drugs and partying with the B-52's, resulting in this freakin' weird ass album.

What we're used to hearing from ToT has been overrun by little gay elves that time travelled from the mid-eighties with every intention of having a monkey-romp disco party in the ass of a great band.

The music isn't horrible, it's just... well, funny... and definitely not ToT. In fact, I laughed my ass off and enjoyed, in a perverted way, the last track the most because that one sounded like it belonged on alternative radio from 1985 amongst the likes of The Primitives.

Bottom Line: Weird and not metal. Amusing and sometimes very discotech. These guys need to go to rehab if they want to continue touring with metal bands.

Did someone make a joke by inserting disco CD with TOT label on it? Is this the album we’ve been waiting for? If so, I’ve got news for you. Go to your nearest store, buy some shiny pants, dance boots and run to your nearest night club, cause that’s the new home of your beloved TOT.

If not for Machine, the first single, City Of Light and Crash/Concrete, I wouldn’t even want to review this album. The First time when I heard Machine I thought "WOW! This going to be a surprise of the year", but still in a positive way. The song was fast with catchy and still heavy guitars. Liv’s voice was still one of the most beautiful female voices in the world and only Raymond’s vocals have radically changed. Somebody just stocked a piece of metal in his throat and he sounds like a robot, but I thought I could live with that. Unfortunately, after listening to the whole album I can’t. Those songs are the only pieces worth mentioning. Rest is just fucking disco and not even a good disco.

I’m sure this album will bring better sales and maybe even some awards next to N’SYNC or some shit like that, but for most of us it doesn’t mean anything and never will.
See you all in the night clubs…