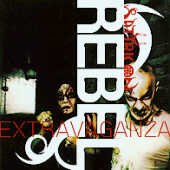 So Satyr finally decides to shave his rapidly balding head, and along with that, the whole band (the two guys) undergo a complete makeover, trying to look as scary as possible and putting their ugly mugs right on the front cover. It shows that Satyr not only has a sense for songwriting, but marketing as well: shock sells. The previous Satyricon albums were jewels in a sea of black metal crap and mimicry, always giving us something new, and (the beautifully packaged) Rebel Extravaganza doesn’t let anyone down on that account.

I’d call RE elaborate, modern, complex black metal (how totally opposite of Satyr’s side project Wongraven, which is basically simple, progressive medieval synths.) It starts off with "Tied in Bronze Chains"-my favorite track. If you’re in the right mood, each song is a treat. If not, the whole album is painfully boring and impossible to sit through (it’s over an hour long)! The real beauty of the songs is the unexpected twists and turns, you never know what to expect next. The lyrics Satyr simply describes as ‘misanthropic’. They mostly describe a terrifying future world overrun by machines and hellspawn and the death of all "white-draped men" and where "justice is replaced by mercy for the inferior". The lyrics are beautifully written (especially in Prime Evil Renaissance), except for a few grammatical errors which no Scandinavian songwriter seems to be able to overcome.

There are some interesting guest musicians here: Fenriz of Darkthrone doing some drums and Dod of Gorgoroth contributing some guitarwork. Also some horribly misplaced female vocals on the last song which almost totally wrecks it, but fear not, Rebel Extravaganza is awesome! It’s a hard listen at first and it takes time to get into. All who put down this album will burn in hell, Satyr is king!

Bottom Line: Soundtrack to a very cold and grim future world. No black metal fan would want to miss this, forget about Darkthrone and Burzum, this is the future of the genre.