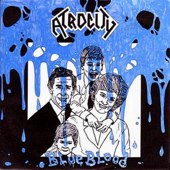 Blue Blood was Atrocity's first official step into business and from today's perspective, it reminds us of two things. Firstly, the band's beginning had absolutely nothing in common with its later polished outputs like the terrible Werk 80 crimes. Secondly, Nuclear Blast was an anarchic label in its early days. Markus Staiger and his comrades had a great affinity for grindcore, crossover and hardcore. The basis of this EP is death metal, but it flirts intensely with grindcore.

No doubt, debutants have the right to offer a strange package, but they should not throw a product on the market whose only function is to show their immatureness. Unfortunately, Blue Blood, disgraced with a stupid artwork, falls exactly into this category. The mix of bulky riffs, blast beats, aggressive yet aimless outbursts and early Napalm Death-like vocals indicates a certain potential from time to time, but the implementation remains on a weak level. The compositions are rather a noisy succession of individual parts, it doesn't matter whether or not they blend with each other and aggravating the situation, many of them don't leave an effect. The structured second track marks the exception in this context, but it just sounds like an experiment gone wrong.

The sound is rather amateurish, but still okay for an EP of a newcomer on a recently founded label. The level of released energy is also acceptable, but so many awkward sequences destroy the overall impression completely. The drum intro sounds like the first lesson of a seven years old child that has never previously had the sticks in its hand, the crude second track delivers nothing but a paralyzing agony and sometimes it seems as if each and every musician plays his own song. That's not the way it should be and from time to time I have the feeling the band presents metal versions of free jazz pieces.

Needless to say that the production remains on a pretty low level. The rattling drums and the monotonous guitars create a tedious sound experience. All in all, stay away from this EP. Even those who like technical death metal will have many other items which are worthier to discover.