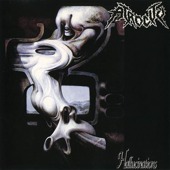 I remember that I was interested in the first full-length of Atrocity at the time of its release. I also remember that I listened to the album a couple of times. But honestly speaking, the fascination of this kind of death metal remained a mystery to me. Even now, almost three decades later, I do not really find access to the material of this debut. Whenever I think I understand it in its full dimension, it's just a hallucination.

Of course, it is positive that the formation tried to find its own niche in the death metal cosmos. I also don't want to ignore the technical skills the dudes obviously had. Additionally, I must mention their enthusiasm. Everybody thought they are authentic heralds of death metal and maybe this was true back in 1990. Shortly afterwards, nobody thought this anymore... However, let's stay in 1990. Atrocity perform on their debut an extremely progressive, sometimes very hectic, mostly inaccessible form of death metal. Despite the surprisingly straight "Fatal Step", this music is the exact opposite of this nearly cozy type of death that bands like Unleashed or Bolt Thrower made socially respectable. Perhaps this configuration is typical for a love-it-or-hate-it record, but I disagree. I appreciate the ambitions of the band, but I do not fall in love with the result.

Atrocity rather perform different parts than homogeneous tracks. Roughly thousand autonomous sequences per song appear. Sometimes they fit together, mostly they don't. I have no clue why the group felt the need to wallow in this form of technical arrogance. Would have been better to integrate a comprehensible structure from time to time. Not to mention a memorable chorus. But Atrocity evidently hate anything that pretty normal music consumers like and therefore they wallow in complex, absolutely non-conventional patterns. A few number of comparatively straight sequences brings the listener back on track every now and then, but this is always just a short pleasure and the name of the second number. "Life Is a Long and Silent River" reveals nothing but a strange from of cynical humour in view of the unorthodox pieces.

Apart from the confusing song structures, the formation works with the usual tools. The lead singer's raw voice avoids pure growling, but it also does not sound extraordinary in the given context. The same applies for the guitars, they are not overly low-tuned and have sometimes almost a thrash metal sound, but they also do not hurt the rules of the sub-genre. Unlike the drums which play every ten seconds a new rhythm, the bass remains more or less silent in the background. By the way, the production can be described as a typical Nuclear Blast product of the early nineties, not bad, but pretty emotionless. In summary, this is a special work for special people who have another taste than me. From my point of view, this album in its entity is hard to endure and please do not ask for highlights. On the other hand, as mentioned before, I respect the ambitions, the technical skills and the courage the new formation had back in 1990. So do me a favour and understand my evaluation as a compromise I made with myself.