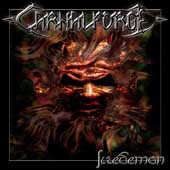 The fury and speed of these Swedes is surely unmatched. Carnal Forge are one of the forerunners of a new Nordic thrash metal wave that is mostly concerned with sheer speed and musical brutality, although, as "Firedemon" demonstrates, that is about as far as the musicianship goes.

The CD starts off like a furious metal hurricane, very catchy and fast but seems to lose strength with each following song, since all of them are written using the same formula. It clocks at about 30 min. but still seems way too long since every track sounds exactly the same. They go completely insane (especially the vocalist) on each song, nothing slow or simple, nothing to give you any breathing space and 12 songs in a row like this is just too much to take.

Lots of filler material, I'm positive it's one of those albums where they wrote 30 songs that sound exactly the same and just picked the best 12 to record. And from the whole album there is only about four songs that I really like, with "Uncontrollable" being my favorite. Double bass drumming is used completely throughout the entire disc, and most of the riffs sound horribly similar, which all just adds to the stifling and smothering quality of the album. The vocalist seems to know all of about two notes of vocal range: loud scream and an even louder scream. The singing is thankfully not the classical black metal rasp yet is not very clear either, but likeable nonetheless. All in all, the Carnal Forge brand of thrash is for the short of listening span and for some insane live shows. Very shallow music that takes not more than about two complete listens to absorb completely, that is, if you can sit through the whole thing.

Bottom Line: RAGE! FURY! PAIN! And absolutely nothing beneath any of it. Totally violent music but gets boring very fast.